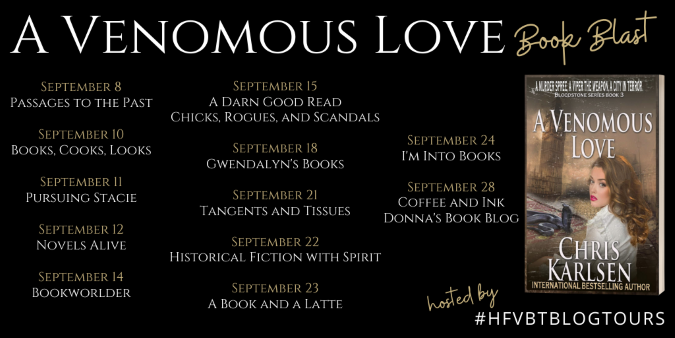 A veteran, Detective Rudyard Bloodstone has fought a brutal battle and witnessed war horrors that haunt his nightmares. Now one of those horrors has followed him home from Africa.

A vicious predator, the Cape cobra, can kill a man in thirty minutes. A suspect using the snake as a weapon in robberies is terrorizing London.

When the crimes escalate into murder, a victim’s daughter, Honoria Underhill, becomes the focus of the killer. After several attempts on her life, Scotland Yard threatens to take over the high profile case. With few leads to follow, Bloodstone and his partner must now fight department politics and catch the killer before Underhill becomes another murder victim.

During the Blog Tour, we are giving away two eBooks of A Venomous Love + a $20 Amazon Gift Card! To enter, please use the Gleam form below.

The giveaway is open to US residents only and ends on September 28th. You must be 18 or older to enter. 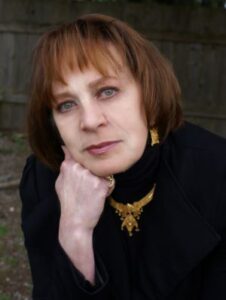 Chris was born and raised in Chicago. Her father was a history professor and her mother was, and is, a voracious reader. She grew up with a love of history and books. Her parents also love traveling, a passion they passed onto her. She wanted to see the places she read about, see the land and monuments from the time periods that fascinated her. She’s had the good fortune to travel extensively throughout Europe, the Near East, and North Africa. She is also a retired police detective who spent twenty-five years in law enforcement with two different agencies. Her desire to write came in her early teens. After she retired, she decided to pursue that dream. She writes two different series. Her paranormal romance series is called, Knights in Time. Her romantic thriller series is, Dangerous Waters. She currently live in the Pacific Northwest with her husband, four rescue dogs and a rescue horse.

Tuesday, September 8
Passages to the Past

Wednesday, September 23
A Book and a Latte