Launch of a new series for upper middle graders about a girl who has lived as an international thief, now returned to the real world.

Frankie Lorde and her dad have been a team for as long as Frankie can remember. Being a tutor under the man responsible for some of the world’s biggest heists has given Frankie a unique perspective on the world. And a special set of life skills. Frankie can spot an FBI agent in a second. Pick a lock in two seconds. Steal a Bugatti in three. Then dad is arrested.

Frankie is sent to live with her uncle, her dad’s brother who she barely knows, and is, ironically a cop. Now Frankie has to go to middle school, learn what suburban kids wear and eat. But also ironically, Frankie is in Greenwich, CT, one of the richest towns in America. Seeing the starkness of super rich and the super not rich who support the community gives Frankie an idea. How to use her skills for doing good, to even the score….

Brittany Geragotelis will be giving away a print copy of The Infamous Frankie Lorde! Available to the US only. 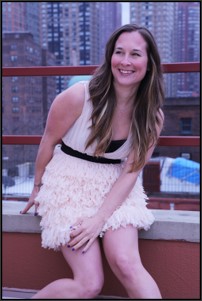 Brittany Geragotelis is living the dream. After 10 years of rejection from the publishing industry, she began to post her original novel, Life’s a Witch, on the online writing site, Wattpad, hoping that others would enjoy reading her book. A year after the first upload, the book had received 19 million reads, which caught the attention of Publisher’s Weekly, The Huffington Post and The Wall Street Journal.

After building up some buzz in the industry, she hooked up with her agents who instantly received interest from publishers and movie/tv producers. Within weeks, Life’s a Witch went into auction between four major publishing houses, and in the end Brittany landed a 3-book deal with publishing powerhouse, Simon & Schuster.