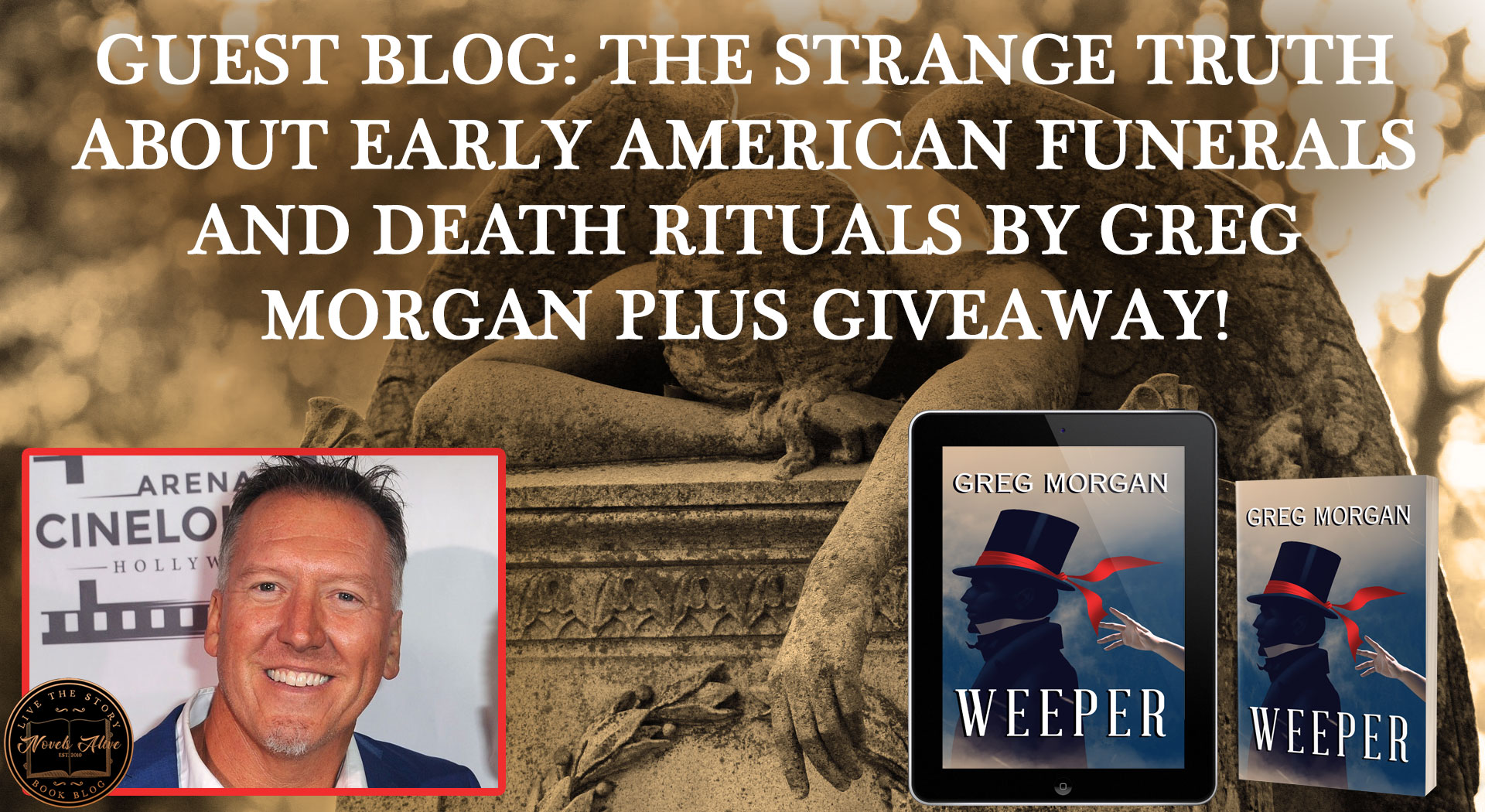 In my current “Death Shall Have No Dominion” book series, I tell fictional stories from the civil war era that have characters with very strange and morbid professions within the death industry.

It started when I saw a short film about a Sin Eater. I’d never heard of one, so I found reference books on early American funeral & death rituals in some tiny section of the library that fascinated me. Most of these odd death rituals came from immigrants that had brought them to the United States. Some were centuries old.

In my first novel, Weeper, the main character is a paid mourner or “weeper.” Paying for someone to cry at your funeral sounds insane today, but it was a common practice until the late nineteenth century and still goes on in places like China. Hiring a paid mourner was a sign of wealth and a sign of respect to the deceased. The more mourners at a funeral, the more respected the deceased was.

Only women were paid mourners in all the research I found, mainly because it was socially acceptable for women to cry in most societies. It was also a way for women to make their own money.

The other main character in Weeper is a “Warner.” Warners were an early version of a funeral director. They’d help set up most of the necessities for a funeral as well as their main job, warning friends and relatives that there had been a death. Here in the US, that tradition came from the Dutch immigrants that mostly settled in Appalachia. The Dutch called them Aanspreekers. Warners would also hand out gifts at a funeral, a common tradition. Dead cakes, a pastry, would have the initials of the deceased carved into them. Other gifts warners would hand out as they invited the guests would be black cotton gloves, handkerchiefs, even ivory rings. Many families would go into debt to pay for a funeral, all to show respect for their family member as well as to show off wealth.

In Weeper and in my second novel, Collodion, to be released in June 2021, I use the Sin Eater as a profession for one of the characters. It will also be the profession of the main character of my third book, unnamed at this time. Sin Eaters come from Wales and have also come to the US through Welsh immigrants. Typically, they sat at a table where the deceased lay, sometimes directly on top of the table or sometimes in a casket. A meal is prepared, put on a plate, and passed over the body or casket to the sin eater on the other side. As it is passed, all of the sins from the deceased are absorbed into the food and the sin eater eats the sins. There are variations I have read such as certain foods are used to remove certain sins, but what if the family didn’t know father had an affair? Hmm, I don’t know about that one. Other accounts indicate the food was typically bread and beer with a small payment. But the interesting thing about sin eating was the poor sin eater would carry all the sins of the people whose sins they had eaten. That person was considered an outcast, the lowest of low. You would not want to associate yourself with one, or else sin would rub off on you. Sin eaters could be either male or female. I’m guessing the only people that would volunteer for such a profession would be lost souls. Those that just didn’t care but still need to eat. Such as the destitute, lepers, an old prostitute, or the town drunkard.

I added many of the strange beliefs and practices found in early American culture into Weeper. Funerals were always done within the home of the deceased. There were no funeral parlors back then, and the priest or preacher would come to you. They would pull all the shades at a home, darkening it. If sunlight were to shine on the face of a mourner, they’d be the next to go. It would be bad luck to meet your spouse at a funeral. Never wear anything new to a funeral, especially new shoes. If a deceased was a good person, flowers would grow on their grave. If they were bad—weeds. After the sermon, you must take the body out feet first, or he will beckon you to come with him. It was considered bad luck to meet a funeral procession head on. If that happened—turn around or go down a side alley. No debt was paid or wills opened until six months had passed after death.

Irish Catholics believed they must keep a vigil on the deceased from the time they die to the burial, and they soaked clothes in vinegar and covered the hands and face of the deceased.

Many homes in the Appalachia area had rooms that could be converted into “Dead rooms” where a funeral could be held. These rooms would have doors to the outside, wide enough to accommodate a casket and its pallbearers on both sides.

I hope you enjoyed learning about these traditions, beliefs and rituals. Some of which are still practiced today in other parts of the world. Maybe my next series might have characters in those countries. So, remember, the last thing I’lll say is to never look at a mirror at a funeral. If you do, you’ll be death’s next victim. 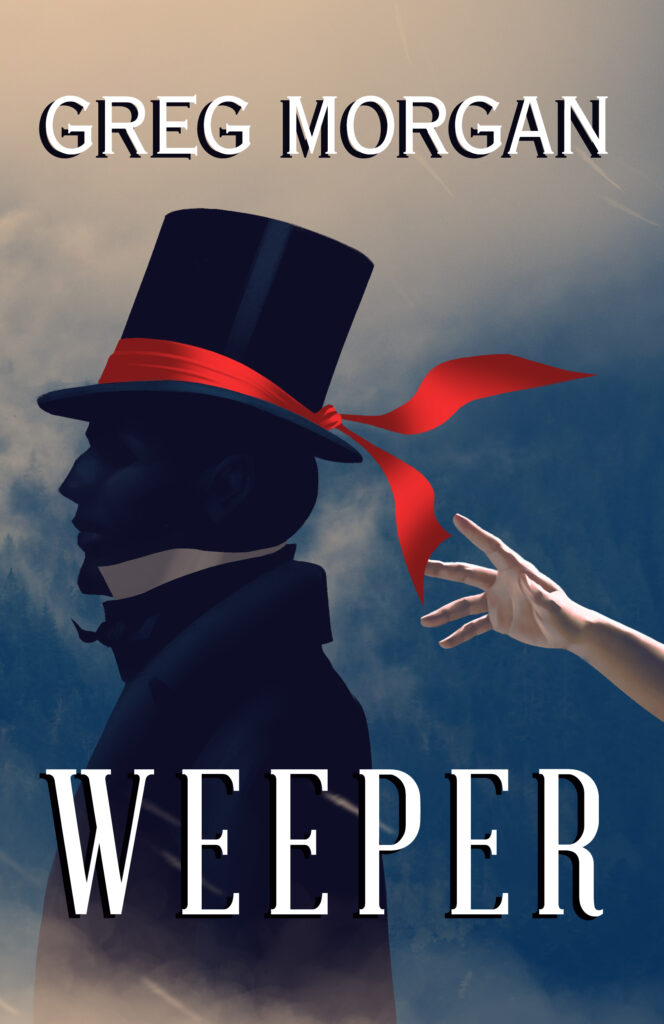 This beautifully constructed family saga spans three generations set all within the macabre world of the civil war era American funeral industry where weepers, warners, death photographers and the new practice of embalming the dead dwelled. For generations, the women of the Fenn family have been traditional “weepers”; paid mourners who attend wakes and weep for the dead. Their counterparts, the men of the True family, are undertakers, or “warners.” The current warner, Archer True is good at his job, but has a vice for whiskey and women, but the latter has disastrous repercussions as he’s also a married man. The weepers were always veiled and always, like him, wore black. One day, he hears a youthful voice from under the veil rather than the older voice he had been used to. When he finds himself irresistibly drawn to the young “Weeper,” Charlotte Fenn, their passionate affair results in pregnancy. The scandal of their unborn child threatens to destroy the reputations and livelihoods of both families.

Originally a screenwriter and independent filmmaker, author Greg Morgan turned his storytelling skills into long-form narrative fiction with his debut novel, Weeper. Weeper is the multigenerational story of the relationships between the members of two 19th century Appalachian families; the True’s, a family of “warners” (early funeral directors), and the Fenn’s, a family of “weepers” (paid mourners). Greg Morgan now continues the genre with Collodion, submerging a charming romance into the macabre world of the nineteenth-century death industry; postmortem photography & embalming. Like Weeper, Collodion, is sure to captivate its readers till the very last page.