Previous article
4 STAR REVIEW: A SIDE OF MURDER by Amy Pershing
Next article
GUEST BLOG: Why Dystopian Books Are Popular With the Youth by Branwen Oshea Plus Giveaway! 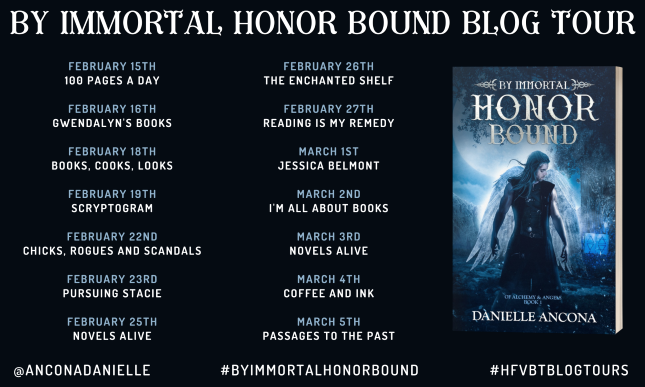 Intrepid warrior angel Malachi faces the fiercest of adversaries of warfare through the centuries, fighting alongside the boldest of gods to defend humankind from the Seraph Rebellion.

Sent to York in the 1620s, Malachi unexpectedly falls in love with keen and ardent alchemist Daphne Heatherton.

For Malachi, Daphne’s returned devotion is a tenuous gift of fate.

Dark machinations set into play by the fallen archangel, Gideon-leader of the Rebellion-bring Malachi to the brink of defeat and put him to the ultimate test.

Will he choose a mortal love, or will he remain By Immortal Honor Bound?

Alchemy, history, passion, myth, science, legend converge in a timeless battle—will love or honor prove to be the most powerful element of all?

Warrior angel Malachi and fallen angel Gideon find themselves on opposite sides in Danielle Ancona’s first installment of the Of Alchemy & Angels series. In this story, titled By Immortal Honor Bound, the art and science of alchemy takes center stage at the hands of young Daphne, a mortal female. While it was extremely uncommon for a female to take on such a role, the author gave Daphne enough skills to hold her own.

I found the language was fairly easy to follow, especially as the storyline progressed into current-day events. With Daphne relying on her natural sense of curiosity, her first encounter with Malachi made me giggle a bit. She was focused on her research, which meant Malachi was a subject under her magnifying glass. The fact she flicked water on him as part of an experiment was amusing. It was clear that the two shared an instant connection.

The good vs. evil saga is evident in Gideon’s efforts to either recruit Daphne or eliminate her. From the earliest times in Egypt and Greece to present day in Seattle, the battle continues. Malachi tracks Daphne’s essence through the ages until he finally encounters Dr. Laurel Heatherton, who is the key to stopping Gabriel’s plans involving biological warfare.

Since this is not the type of book I normally read, I did struggle a bit early in the story with the characters, but it wasn’t anything that prevented me from moving forward. I think readers who enjoy this genre will find this an excellent start to a new series, with the second installment slated for 2022. 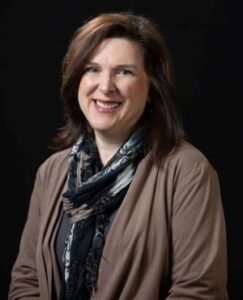 Pittsburgh has provided an interesting, vibrant, and eclectic place to grow up and eventually become a writer of stories. Stories through which History, Science, Alchemy, Romance, High Stakes, and Mythology are woven.

My writing is also touched by ghostly echoes which greet me as I hike or bike through what were once bustling sites from the age of industry of the region, now reclaimed by nature. These are the ethereal remnants of those who shed their blood, sweat and tears onto what is now sacred ground.

Come dive into the stories shaped by these unique forges. The twists in the path are unexpected, fraught with danger, but always worth the journey.

Where passion and love take root unexpectedly, bloom, and somehow manage to survive against all odds, one surprising way or another.

Saturday, February 27
Excerpt at Reading is My Remedy

Tuesday, March 2
Excerpt at I’m All About Books

Friday, March 5
Interview at Passages to the Past

I think readers who enjoy this genre will find this an excellent start to a new series, with the second installment slated for 2022.4 STAR REVIEW: BY IMMORTAL HONOR BOUND by Danielle Ancona