4 STAR REVIEW: THE BRIDE WHO GOT LUCKY by Janna MacGregor

He would do anything to protect her. Even marry her…

The son of a cold-hearted duke, Nicholas St. Mauer isn’t one to involve himself in society…or open his own heart to anyone. But driven by honor, the reclusive Earl of Somerton feels obliged to keep a watchful eye on Lady Emma Cavensham. She possesses a penchant for passions unbecoming a woman that finds Nick in constant peril of losing his well-structured solitude. She even dared kiss Nick once―an utterly unladylike, and delightful, lapse…

Emma can’t deny the appeal of the earl’s attention, and occasional affection, but she has no need for a man. There are worse fates than spinsterhood, as Emma knows too well. She still mourns the loss of her dear friend Lena, and is determined to prove Lena’s husband responsible for her death before he lures another innocent woman into a brutal marriage. But as Emma pursues her prey, a compromising moment upends all her plans. Now, with gossip swirling and her reputation in tatters, Nick may be the only man brave enough to join in Emma’s cause.. and fight for her heart. 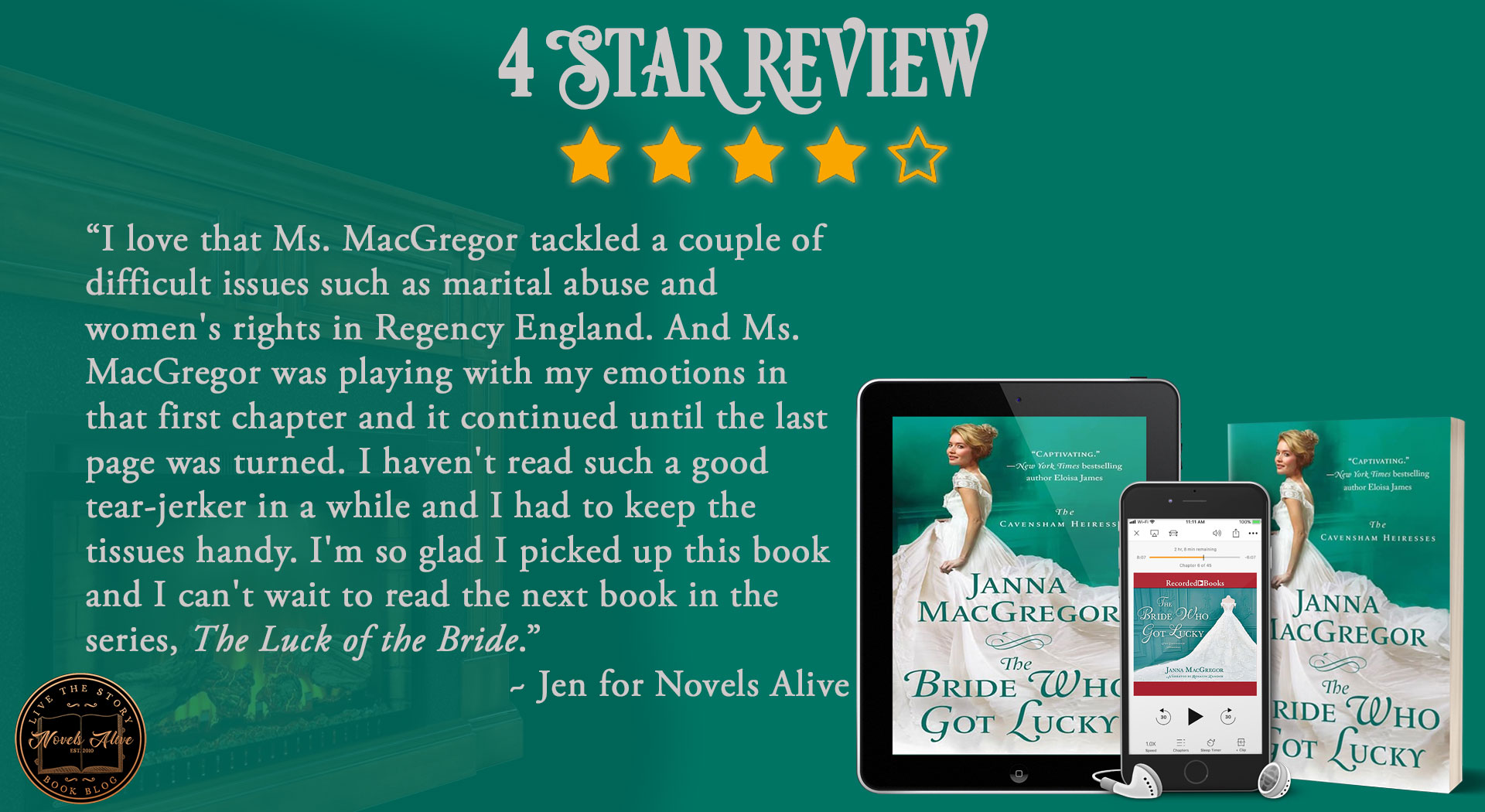 I had the pleasure of meeting Janna MacGregor at a book conference several years ago and I obtained a copy of the first book in the Cavensham Heiresses series, The Bad Luck Bride. I read the book during breaks at the conference and just loved it. So when I saw the next book in the series, The Bride Who Got Lucky, was available on NetGalley, I snagged up a copy… and then never read it. Until now.

I honestly don’t know why it took me so long to read this book. I was sucked into the story from page one and I was enthralled until I read The End. Right off the bat, Ms. MacGregor introduced Nick and my heart just ached for him and I couldn’t wait to see how his story turned out. Nick’s childhood was quite lonely and it carried over into adulthood. He has a very limited group of friends and refuses to acknowledge his father. But Emma is on the edge of that circle of friends and after coming to her rescue, it seems they’re forever bound.

I really enjoyed both Nick and Emma. Nick’s a self-made man, not depending on his father the duke for anything. He has very strong personal views that Emma tests… in a good way.  Nick’s drawn to Emma, but he doesn’t want any sort of attachment since it always leads to heartache. Emma on the other hand had very strong feminist beliefs. She doesn’t want to get married because she’d lose what little rights she has. And she believes her best friend lost her life to her husband and she doesn’t want to even consider that it could happen to her as well. Emma’s a bluestocking, preferring books and dreaming of a bank for women rather than attending ton events (which she goes to for her friends and family). Emma and Nick together are so good. They test each other and there are definite sparks flying off the page.

I love that Ms. MacGregor tackled a couple of difficult issues such as marital abuse and women’s rights in Regency England. And Ms. MacGregor was playing with my emotions in that first chapter and it continued until the last page was turned. I haven’t read such a good tear-jerker in a while and I had to keep the tissues handy. I’m so glad I picked up this book and I can’t wait to read the next book in the series, The Luck of the Bride.

Janna MacGregor was born and raised in the bootheel of Missouri. She credits her darling mom for introducing her to the happily-ever-after world of romance novels. Janna writes stories where compelling and powerful heroines meet and fall in love with their equally matched heroes. She is the mother of triplets and lives in Kansas City with her very own dashing rogue, and two smug, but not surprisingly, perfect pugs. She loves to hear from readers.

I love that Ms. MacGregor tackled a couple of difficult issues such as marital abuse and women's rights in Regency England. And Ms. MacGregor was playing with my emotions in that first chapter and it continued until the last page was turned. I haven't read such a good tear-jerker in a while and I had to keep the tissues handy. I'm so glad I picked up this book and I can't wait to read the next book in the series, The Luck of the Bride.4 STAR REVIEW: THE BRIDE WHO GOT LUCKY by Janna MacGregor