The Lockdown Tales is a kind of hybrid novel/short story collection. It follows ten people, seven women and three men, who leave the city and stay together on a farm. The book covers about seven months of their lockdown.

Many of the characters begin in battered condition, for example having lost a loved one to Covid-19, or having survived a bad case only to lose their lover and their job. A supermarket check-out operator is terrified of catching the virus and being unable to look after her four-year old son. And so on. Over the course of the book they learn to trust and support each other, and most manage some kind of healing. Some relationships are broken, and new relationships form.

But on five Fridays they get together to tell stories, each day’s stories having a different theme: disobedience, love, patience, underdogs and escape.

I generally found that I’d wake up with no idea what story I was going to write that day. I’d go for a walk, and my question to myself was always: what sort of story would the character whose turn it is to speak want to tell? What would be its setting? And what would they be trying to say to the others, by telling that particular story?

So for both the long story and the short stories, the plots came from the characters. And my morning’s walk.

I suppose the luckiest man is Bran, who begins the book sick, jobless, with his lover just having dumped him. At the farm he attracts two young women, plus the love of a four-year-old boy. He’d lose everything if he didn’t behave ethically, but he’s decent enough to get by.

I’m probably more like Stuart, though: older, tired, prone to boredom, amiable but a bit more cynical than is good for him.

If I’m allowed to change sex, then I’d like to be Jayleen, the former check-out operator. She is, in her quiet way, the most loving and the wisest person there. Gail, who organizes the retreat to her farm, is a pretty close competitor, and a very generous host.

Some people I know begin as characters in the book. But then they get a make-over: different appearance, obviously, but also different habits, manner of speech, and personality traits brought in from other people I know.

So no one I know ever ends up as a character in my book.

Friends have sometimes guessed that a particular character was partly taken from them, and asked me about it. They’ve never been right, so far. That’s probably a good thing.

Apart from Princess Aurora, daughter of Ming the Merciless, from the Flash Gordon comics (and Mike Leigh’s bonkers movie), because she’s kind of hot, I think I’d like to hang out with Squire Weston from Henry Fielding’s Tom Jones for a while. Then get myself a new liver.

I’ve got an ensemble cast of ten, so I re-read the last things that character did and said, and then I go for a walk. It seems to work. Walking is this writer’s magic.

I like science fiction a lot, as a kid, but that’s not a genre I write in now. But science fiction, while it may be a bit weak on characterization, is very strong on plot.

The need to have a strong plot has stayed with me. You can’t just write character studies full of wry observation. There has to be a clear story thread, and things have to actually happen. That’s stuck with me.

A lot. I found myself having to find out who ruled Pisa in 1435, what conditions were like in New Guinea in 1944, who showed Bertrand Russell round China in 1920, and much much more.

I had to come up with ways of making a car impossible to start, which is easily reversible, and a lot about how to create a sheep dip on a farm, with less harm to the sheep or environmental damage.

I wrote one story about a young man held in the Australian Government’s refugee detention centre from 2009 to 2017, who escaped in a self-built catamaran. I had to research the route he’d take, bearing in mind currents, wind, and surveillance, to get to Australia. I managed to make it convincing to people who sail. I’ve forgotten it all now, of course.

I once had a job sexing chickens. It’s less illegal than it sounds.

The Lockdown Tales was, obviously, prompted by the lockdown. It was clear that I wouldn’t be going out and about for a while. I thought I’d write a book that is mostly positive, and draws on things people have done in the past to support each other during pandemics.

Giovanni Boccaccio’s Decameron, written shortly after the Black Death had passed through his part of Europe, was a huge inspiration.

Today, literally today, I wrote “The End” at the end of the second volume, called The Lockdown Tales: Emergence, which continues the story and ends with most of the group returning to the city.

I’m taking three days’ off from writing. But when I began The Lockdown Tales in March 2020, I was writing a novel about a young Irish-American who gets caught up in Great Power rivalry in Persia in 1865. I had to set it aside to focus on The Lockdown Tales.

My cast has been stuck halfway up a Persian mountain for about sixteen months, checking their watches and kicking rocks, waiting for their author to get back to them. See you on Monday, guys.

Thanks so much for joining us today, Alan. I’ve really enjoyed your answers!

Read on to learn more about Alan’s book, The Lockdown Tales. 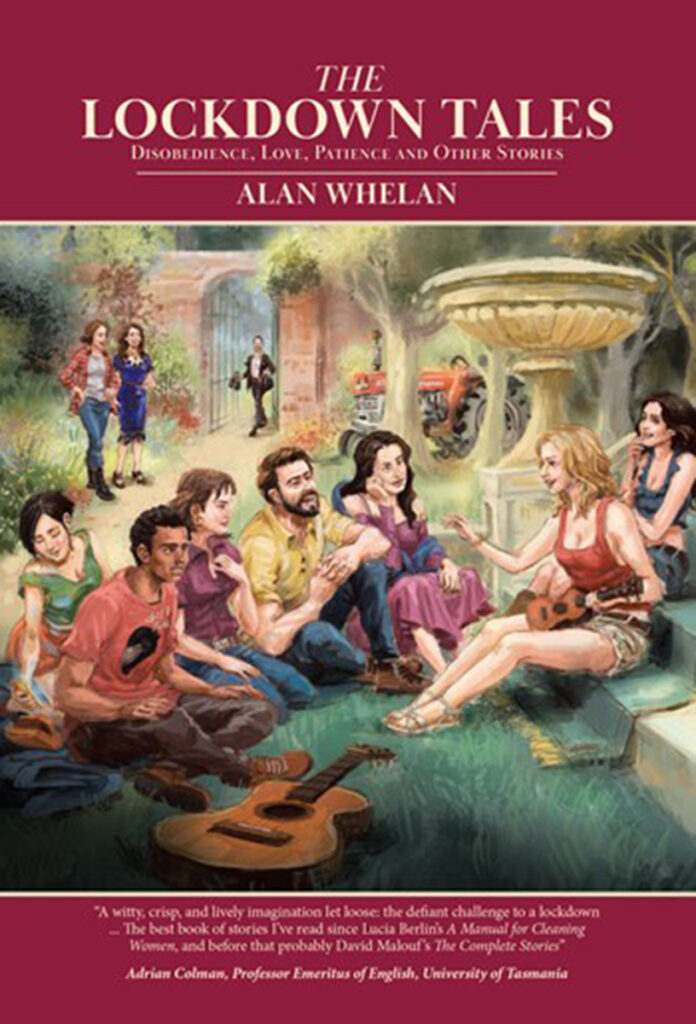 Seven women and three men leave the city to avoid a pandemic. They isolate together in a local farm, where they pass the time working, flirting, eating, drinking, making music and above all telling stories. It happened in Florence in 1351, during the Plague, and gave us Boccaccio’s Decameron.

“Alan Whelan brings us a clever, sensual and sometimes poignant collection of stories that would make Boccaccio proud” – Tangea Tansley, author of A Question of Belonging

“An old frame for a sharp new snapshot of contemporary Australia”
– Leigh Swinbourne, author of Shadow in the Forest 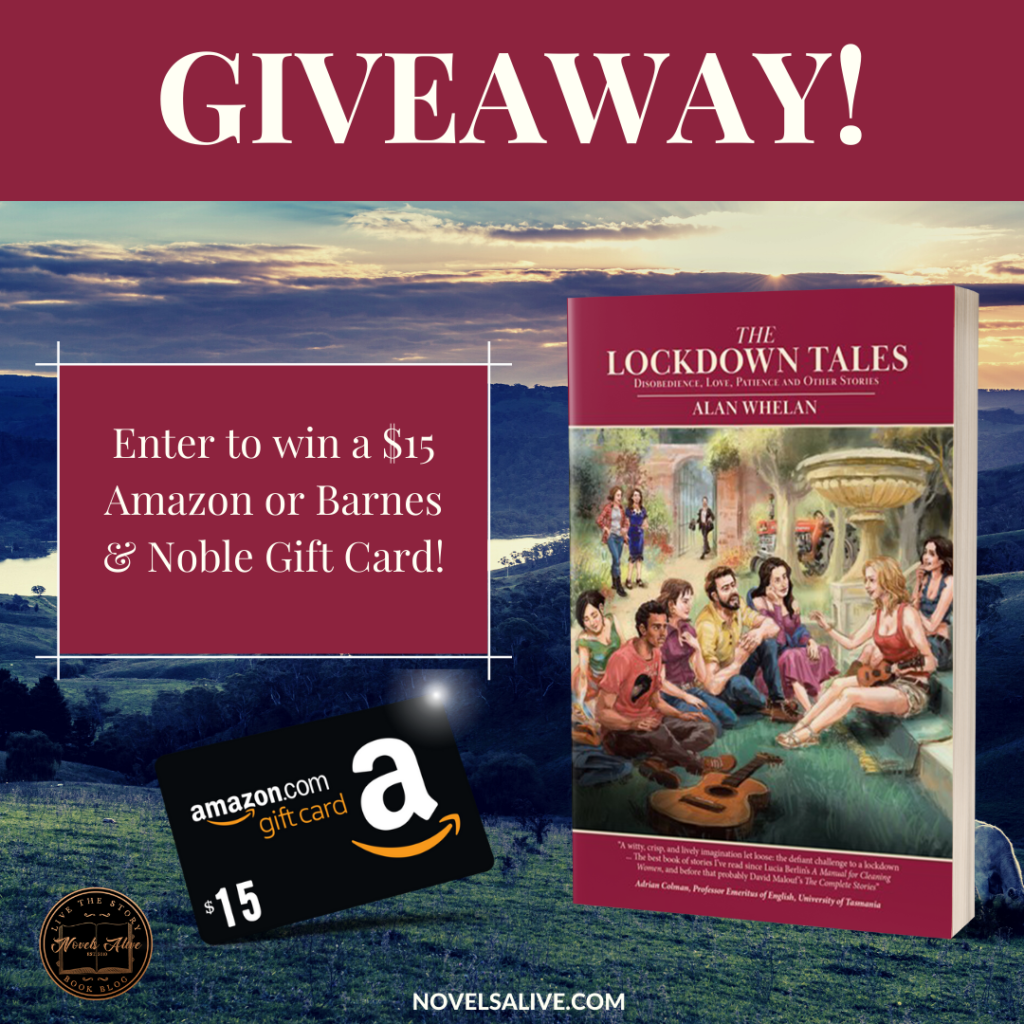 Alan Whelan will be awarding a $15 Amazon or Barnes & Noble gift card to a randomly drawn winner via Rafflecopter during the tour. 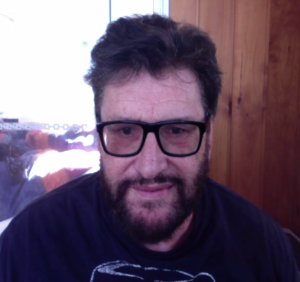 Alan Whelan lives in the Blue Mountains of NSW, Australia. He’s been a political activist, mainly on homelessness, landlord-tenant issues, and unemployment, and a public servant writing social policy for governments. He’s now a freelance writer, editor, and researcher.

His story, There Is, was short-listed for the Newcastle Short Story Award in June 2020, and appeared in their 2020 anthology. His story, Wilful Damage, won a Merit Prize in the TulipTree Publications (Colorado) September 2020 Short Story Competition, and appears in their anthology, Stories that Need to be Told. It was nominated by the publisher for the 2021 Pushcart Prize.

His book The Lockdown Tales, using Boccaccio’s Decameron framework to show people living with the Covid-19 lockdown, is now on sale in paperback and ebook.

Alan Whelan co-wrote the book, New Zealand Republic, and has had journalism and comment pieces published in The New Zealand Listener and every major New Zealand newspaper, plus The Australian and the Sydney Morning Herald.

He wrote two books for the NZ Government: Renting and You and How to Buy Your Own Home. His stories also appear in Stories of Hope, a 2020 anthology to raise funds for Australian bushfire victims, and other anthologies.