Previous article5 STAR REVIEW: The JOURNALIST by David Gardner
Next articleGUEST BLOG: How I Met Mrs. Pringle by Jillianne Hamilton Plus Giveaway! 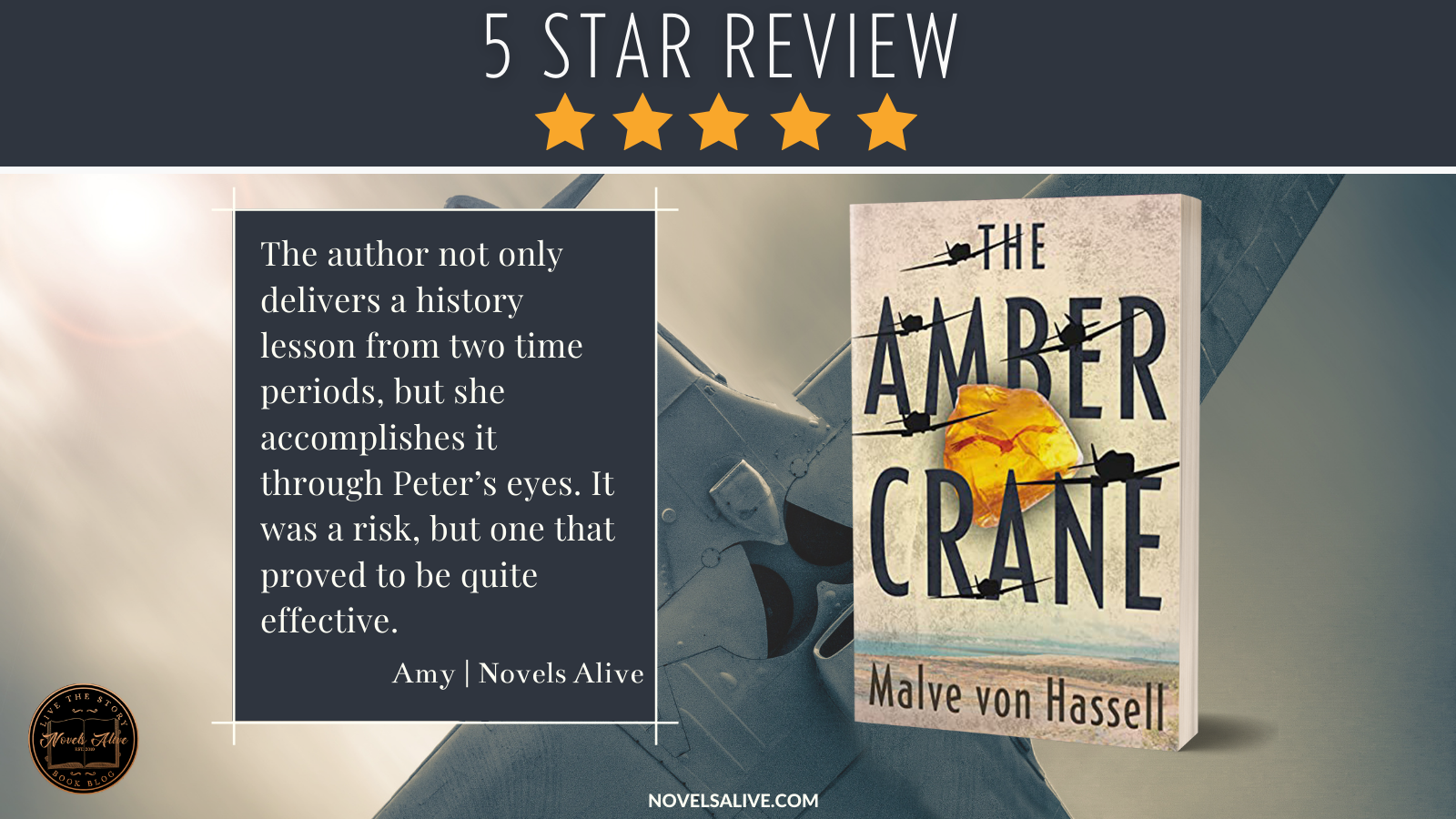 Chafing at the rules of the amber guild, Peter, an apprentice during the waning years of the Thirty Years’ War, finds and keeps a forbidden piece of amber, despite the risk of severe penalties should his secret be discovered.

Little does he know that this amber has hidden powers, transporting him into a future far beyond anything he could imagine. In dreamlike encounters, Peter witnesses the ravages of the final months of World War II in and around his home. He becomes embroiled in the troubles faced by Lioba, a girl he meets who seeks to escape from the oncoming Russian army.

Peter struggles with the consequences of his actions, endangering his family, his amber master’s reputation, and his own future. How much is Peter prepared to sacrifice to right his wrongs?

Young Peter Glienke, currently serving as an apprentice, yearns for the day that he becomes master of his own fate. It’s 1644, a time when war is ongoing, and possession of amber is strictly regulated. Author Malve von Hassell uses this as the backdrop for a thrilling time travel tale in The Amber Crane.

When Peter finds two unusual pieces of amber while on the forbidden beach, he faces a difficult decision. If anyone discovers he has the amber, he could face serious punishment. As an artist, though, the raw amber calls to him. I found this dilemma interesting, particularly as the author dove deeper by noting the Duke of Prussia had staked a claim on all amber.

As the storyline progresses, it appears that the amber has some time travel abilities, propelling Peter into 1944, where he encounters a world in the midst of war. Watching Peter react to three centuries’ worth of progress was rather amusing in some areas. The time-jumping focuses around a girl named Lioba, with the author setting the stage for a breath-taking revelation.

Peter’s decision to craft the small piece of amber into a heart pendant for his sister sets into motion a life-changing set of events when it is discovered. As a character, Peter evolves from a 15-year-old boy into a man. With rich secondary characters adding flavor to the story, Peter comes full circle and realizes his connection to the future.

The author not only delivers a history lesson from two time periods, but she accomplishes it through Peter’s eyes. It was a risk, but one that proved to be quite effective. Malve von Hassell was born in Italy and spent part of her childhood in Belgium and Germany before moving to the United States. She is a freelance writer, researcher, and translator. She holds a Ph.D. in anthropology from the New School for Social Research. Working as an independent scholar, she published The Struggle for Eden: Community Gardens in New York City (Bergin & Garvey 2002) and Homesteading in New York City 1978-1993: The Divided Heart of Loisaida (Bergin & Garvey 1996). She has also edited her grandfather Ulrich von Hassell’s memoirs written in prison in 1944, Der Kreis schließt sich – Aufzeichnungen aus der Haft 1944 (Propylaen Verlag 1994). She has taught at Queens College, Baruch College, Pace University, and Suffolk County Community College, while continuing her work as a translator and writer. She has self-published a children’s picture book, Letters from the Tooth Fairy (2020) and 2020) and her translation and annotation of a German children’s classic by Tamara Ramsay, Rennefarre: Dott’s Wonderful Travels and Adventures (Two Harbors Press, 2012). The Falconer’s Apprentice (namelos, 2015) was her first historical fiction novel for young adults. She has published Alina: A Song for the Telling (BHC Press, 2020), set in Jerusalem in the time of the crusades, and has a forthcoming book, The Amber Crane (Odyssey Books, 2021), set in Germany in 1645 and 1945. Currently, she is working on a biographical work about a woman coming of age in Nazi Germany.