Previous article
BOOK BLAST: LOVE OVER K-POP by Marilyn Vix Plus Giveaway!
Next article
GUEST BLOG: A Little Bit About My Career by Heather Haven Plus Giveaway!

I think the question that writers get the most is, “How did you become a writer?” That and “Will you take a look at my manuscript?”

It may sound cliché, but I feel like I was born a writer. As soon as I learned how to put sentences together, I was making up stories about my stuffed animals. In my stories, there was an entrance at the bottom of my toy box that led into a whole other world where they all lived. From there, I went through a poetry-writing phase, which led to the first time I was ever published—I won a poetry-writing contest when I was 13. I also had my first song published the same year.

After the poetry phase, I started writing articles and short stories. My short story writing didn’t last very long, but I did get a few of them published in teen and religious magazines. In my mid-teens, I decided that I wanted to write mystery novels. It was around that time that I discovered Sherlock Holmes and Agatha Christie thanks to my younger brother—that is where my love of mysteries began.

For the next several years, I kept trying to write a book, but I never got very far. Then one day in my early twenties, I attended my first Sisters In Crime meeting. Sisters in Crime is an international mystery readers and writers group that has chapters all over the world. When asked what I did for a living, I told people that I was a gospel singer—it was something I had been doing since I was twelve. The response I kept getting was, “You should write a mystery about a gospel singer.” This was something that I had never considered—to me that life was boring because I lived it. However, I decided to give it a try, and that was the first time I ever managed to get all the way to the end of a book! I went on to publish four books in that series with a small publisher.

At the same time, I was trying to write a book, I spent several years off and on writing for our local newspaper. And then eleven years ago, after being let go from the newspaper for “creative differences” just before Christmas (they wanted me to write faster and not research so much—yep, I’m not kidding), I started my own online magazine called Kings River Life, where we cover everything that my former editor told me no one wanted to read about—animal rescue, the arts, human interest, and of course mystery! Most of my writing for the past eleven years has been devoted to KRL, but a few years ago, I started getting the itch to write fiction again. As much as I enjoy all of the other writing, nothing gives me the joy and thrill of writing a mystery novel!

Jump ahead eleven years after the last book came out in my other series and I finally have a brand new book out that is the first in a brand new series! One of Us features a podcasting part-time PI named Roxi Carlucci, and is set in the Tower District of Fresno, California, which is the cultural hub of Fresno. The book involves theatre, animal rescue, a gossip website, and of course murder!

Where will my writing journey take me from here? My hope is that there will be many more mystery novels to come featuring Roxi and The Tower District. I hope you will follow me on that journey! 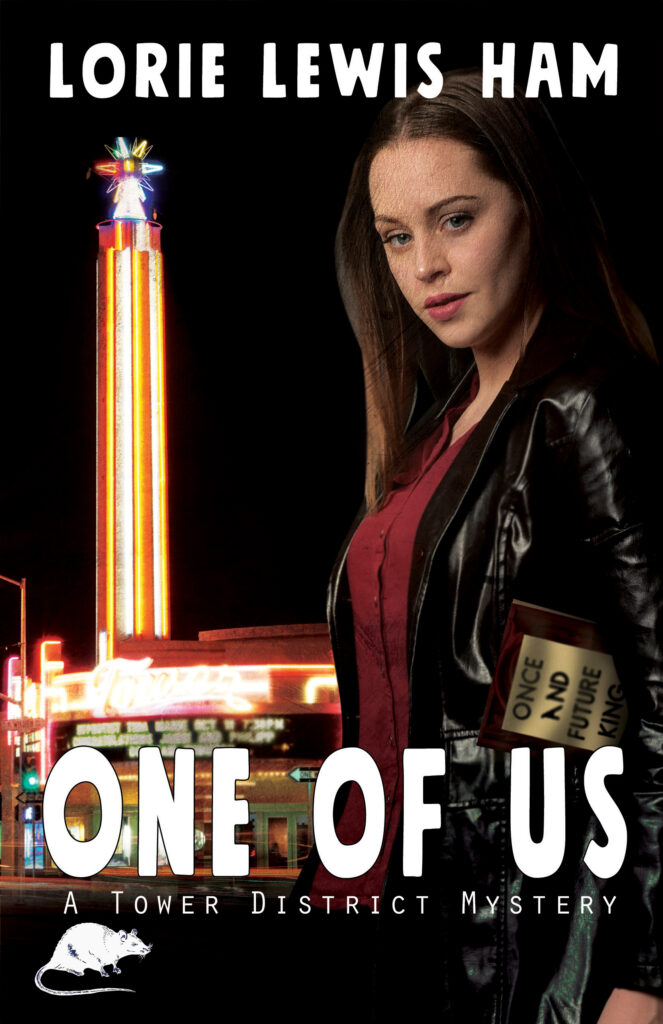 At 35, children’s book author Roxi Carlucci finds herself starting over again after her publisher drops her book series. With no income, she has to pack up her life on the California Coast, along with her pet rat Merlin, and move in with her cousin, P.I. Stephen Carlucci, who lives in Fresno, CA. The one redeeming factor is that Stephen lives in the Tower District—the cultural oasis of Fresno.

Stephen talks Roxi into helping out with a community theatre production, which is also a fundraiser for a local animal rescue. Little did she know that someone would be murdered during a rehearsal, and that she and Stephen would be hired to find the killer. The killer has to be one of Roxi’s new acquaintances since the theatre was locked at the time of the murder, but no one seems to have a motive. How can they solve a murder without a motive? Could the local gossip website hold any clues? Can they stop the killer before they strike again? 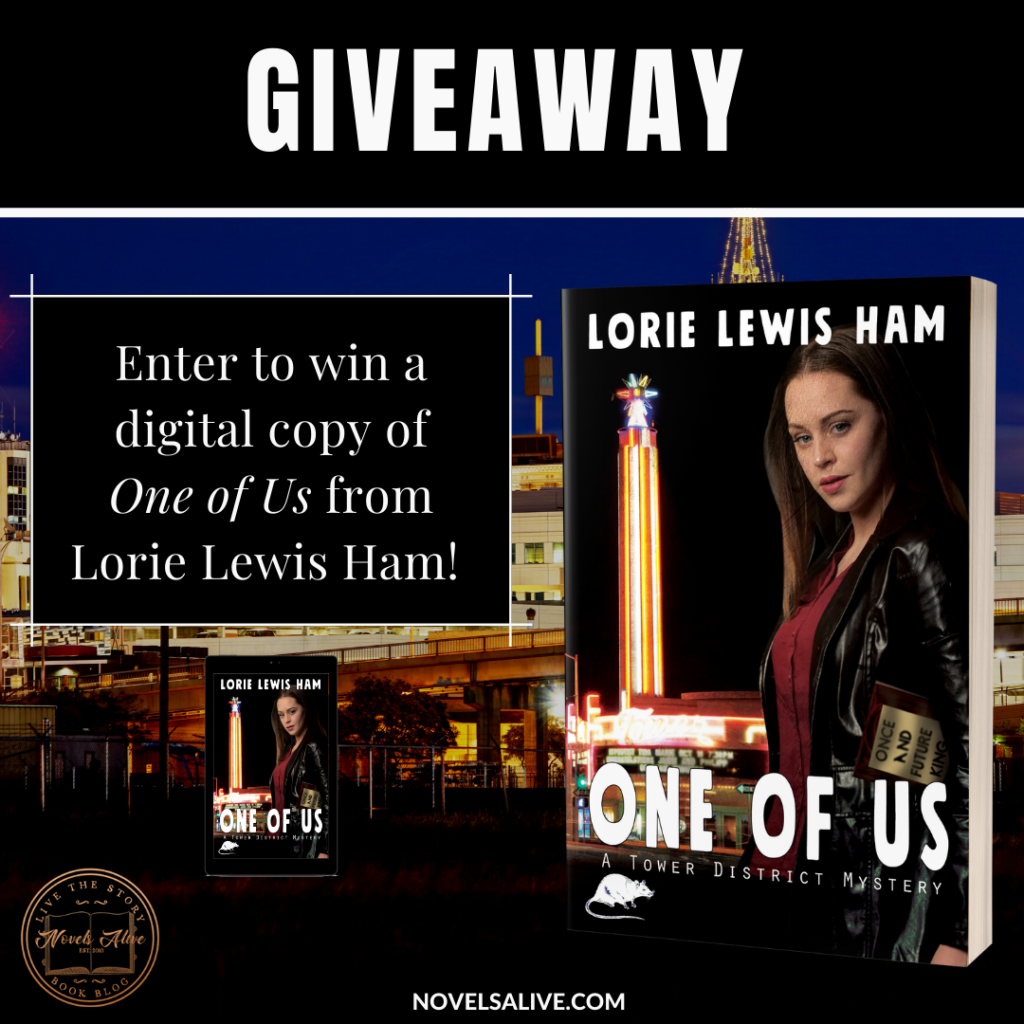 Lorie Lewis Ham lives in Reedley, California, and has been writing ever since she was a child—her first stories were about her stuffed animals. Her first song and poem were published when she was 13, and she has gone on to publish many articles, short stories, and poems throughout the years, as well as write for a local newspaper. Four out of 5 of her previously published mystery novels feature gospel singer Alexandra Walters and are set in the San Joaquin Valley. Those books were inspired by the many years she spent traveling and singing gospel music with her family. One Of Us is the first in a brand new mystery series set in the Tower District of Fresno, California featuring podcaster and part-time detective Roxi Carlucci. Lorie has also been the publisher of the online magazine Kings River Life for the past 11 years (kingsriverlife.com), and of its sister website KRL News & Reviews (krlnews.com). She also launched a mystery podcast called Mysteryrat’s Maze (mysteryratsmaze.podbean.com) 3 years ago which features mystery short stories and first chapters read by local actors, including the first chapter of this book. You can find the podcast on Apple Podcasts, and all of the other usual places. You can learn more about Lorie on her website mysteryrat.com and find her on Twitter @mysteryrat and Facebook. Another way to keep up with Lorie’s writing is to subscribe to her newsletter—you can find info on doing that on her website.

Lorie has been married to Larry for 30 years and they have 2 grown children—Jayce and Joseph Ham. She currently has 5 cats (Merlin, Sam, Dean, Sidney, and Willow), 4 dogs (Lestat, Huey, Xander, and Phoebe), and a pet dwarf rabbit (Sherlock). For many years, she worked in pet rat rescue and has had many pet rats of her own over the years.

September 15 – I’m All About Books – SPOTLIGHT

September 25 – Escape With Dollycas Into A Good Book – SPOTLIGHT