4 STAR REVIEW: AN EGGNOG TO DIE FOR by Amy Pershing

Christmas has come to Fair Harbor, but when the town’s Santa is murdered, it will be up to Sam Barnes to find a killer in this newest installment of the Cape Cod Foodie Mysteries.

Food writer Sam Barnes wants a lot of things: a quiet Christmas at home with her dog and the town’s handsome harbormaster, to never be in a viral video again, and to stop finding dead bodies. Unfortunately for Sam, her parents are coming to visit, she’s often around cameras for work, and she just found the town Santa dead in the storage room of the cocktail bar she was profiling.

Although she was only interviewing the owners of the Ginger Jar in hopes of getting the recipe for their Coquito Eggnog cocktail for the friends and family Christmas Eve dinner she’s hosting, Sam quickly finds herself taking on the role of investigator once again. She needs to find out who slayed this Santa–but with holiday stress already building, will Sam be able to pull off a perfect feast and nab a killer? 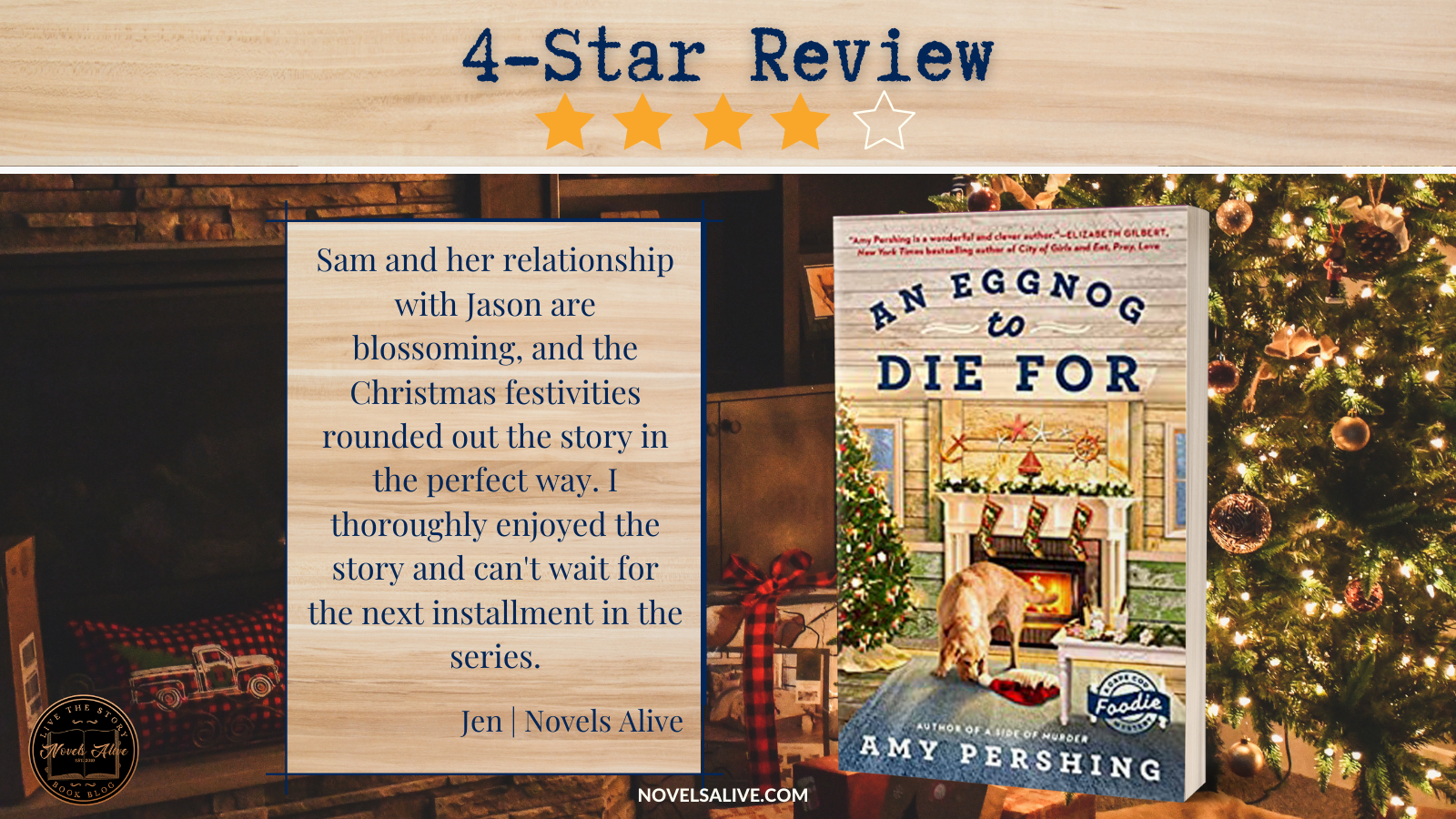 I really enjoyed the first book in the Cape Cod Foodie Mystery series, A Side of Murder by Amy Pershing, so when I came across An Eggnog to Die For, I just knew I needed to read it. And bonus points for it also being a Christmas story!

Samantha Barnes is the series’ amateur sleuth in An Eggnog to Die For, and she’s been enjoying being back in her hometown and reconnecting with her friends, and figuring out her relationship with Jason. She’s working part-time for the local newspaper doing restaurant reviews and spotlights.

With Christmas quickly approaching, she’s planning a small gathering of friends for the holiday when he stumbles on a dead body and can’t keep away from the mystery. Throw in the little twist that her parents decide to visit for the holidays, and madness ensues.

I found the mystery in An Eggnog to Die For to be quite well-rounded. I appreciated there were several people with motives as we slowly discovered the man who was killed was quite evil. There were twists and turns that kept me on my toes, and the ending was quite satisfying.

During all her mystery-solving, Samantha is also dealing with all that comes with the holidays: Parties, dinners, tree trimming, and the local festival, to name a few. At the end of the book, the author offers up several recipes mentioned during the story.

An Eggnog to Die For is more developed than the previous book in the series, as was the mystery. Sam and her relationship with Jason are blossoming, and the Christmas festivities rounded out the story in the perfect way. I thoroughly enjoyed the story and can’t wait for the next installment in the series.

November 2 – I’m All About Books – SPOTLIGHT

November 3 – Escape With Dollycas Into A Good Book – REVIEW

November 5 – Cozy Up With Kathy – REVIEW

November 8 – Reading Is My SuperPower – REVIEW

4 STAR REVIEW: AN EGGNOG TO DIE FOR by Amy PershingAn Eggnog to Die For is more developed than the previous book in the series, as was the mystery. Sam and her relationship with Jason are blossoming, and the Christmas festivities rounded out the story in the perfect way. I thoroughly enjoyed the story and can't wait for the next installment in the series.