GUEST BLOG: An Influential Curiosity by Michael Bradley Plus Giveaway! 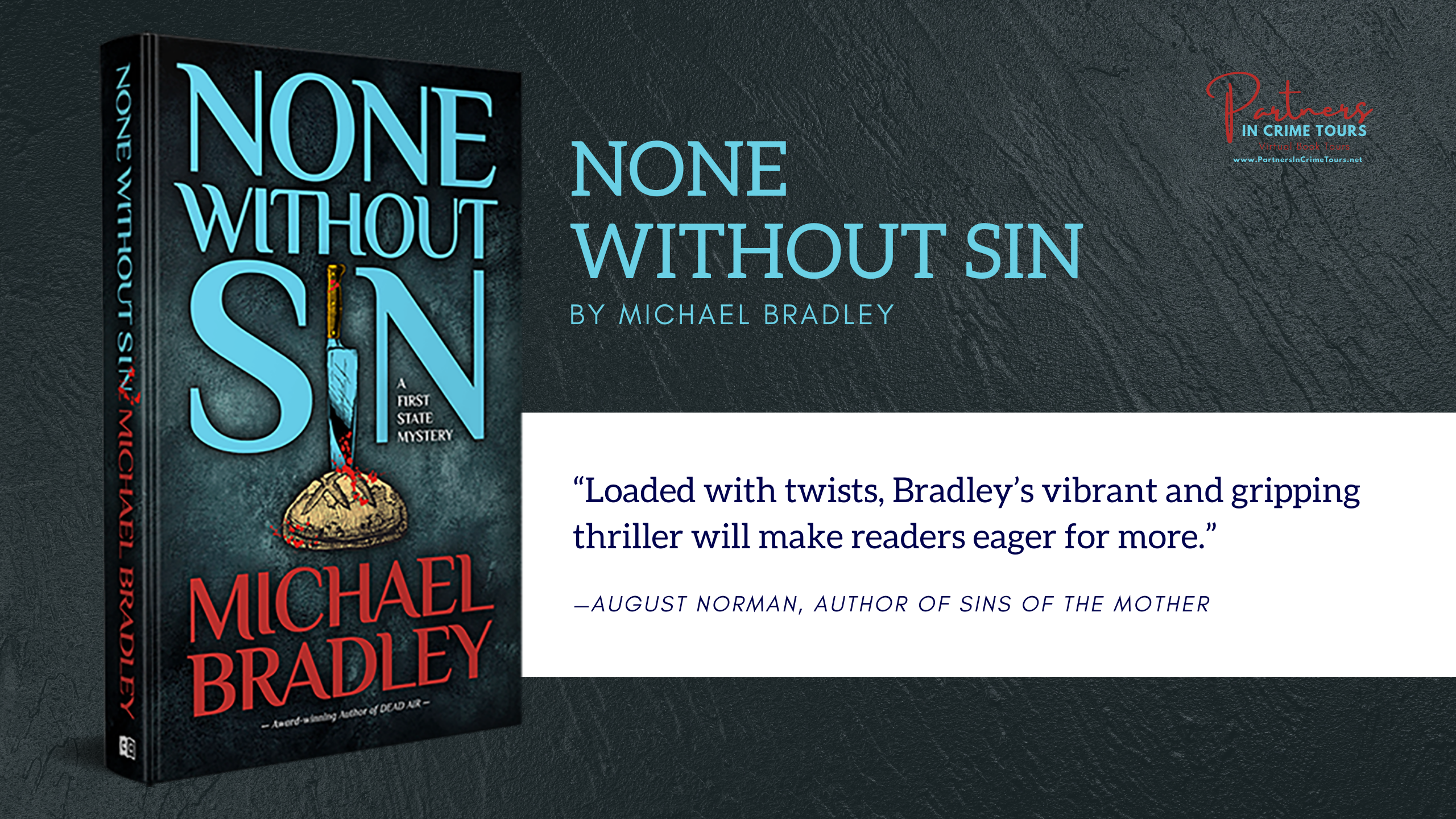 A question that I am often asked is, what book(s) influenced your writing the most? Most people would expect a writer to talk about a great seminal work like Stephen King’s On Writing: A Memoir of the Craft, or perhaps Story Trumps Structure by Steven James. Both are fantastic works about the craft of writing, but I think the book series that impacted my writing the most must be the Conan Flagg Mystery series by M. K. Wren.

I discovered this series when I was a teenager while browsing through a used bookstore. The first book in the series, Curiosity Didn’t Kill the Cat, was published in 1973, and was already a bit outdated when I stumbled upon it in the mystery section. At the time, my only exposure to mysteries was Sherlock Holmes and Encyclopedia Brown. The back cover copy intrigued me, so I bought it. And thus was my first venture into the world of the modern amateur detective.

For those who are unfamiliar with the series (which I figure is probably most), Conan Flagg was ex-military intelligence, and the owner of a used bookstore in a small resort town in Oregon. He was also a licensed private investigator; a fact that he tried to keep secret to all but his closest friends. As you might assume, murder and mayhem seemed to find Conan Flagg.

There was a total of eight books in the series, published between 1973 and 1994. At one point in my early life, I had all eight in paperback. However, as the years came and went, so did my paperbacks.

Why do I consider this series as the most influential to my writing? The Conan Flagg series was my first introduction to the mystery sub-genre of the amateur detective. The idea that an individual with no law enforcement authority would solve crimes was fascinating to me. It also helped that Wren wrote compelling stories that included well-defined characters and suspenseful plots. Although you could call Sherlock Holmes an amateur detective, the comparison between Conan Doyle’s character and that of the modern-day amateur is a stark reminder of the differences in the eras in which the stories are written. Holmes, the consummate Victorian know-it-all versus the modern-day fallible everyday sleuth.

It only made sense that my love of amateur detective fiction would find its way into my writing. In my new novel, None Without Sin, the amateurs were the only option for me. Pitching a newspaper journalist and a faithless minister against a mysterious killer who adopted the symbolism of a Victorian-era religious ritual seemed more compelling, as well as more fun to write.

The Conan Flagg series went out of print near the turn of the century, and, to my dismay, have been unavailable for many years. Recently, the estate of M. K. Wren republished the series as ebooks, and I jumped at the opportunity to reread the books once again. It felt like revisiting an old friend. The Conan Flagg Mystery series, although a bit anachronistic now, still holds the excitement I felt as a teenager. The stories are still entertaining and compelling. The influences are still there, as is the childhood wonder that drew me into the world of the amateur detective. 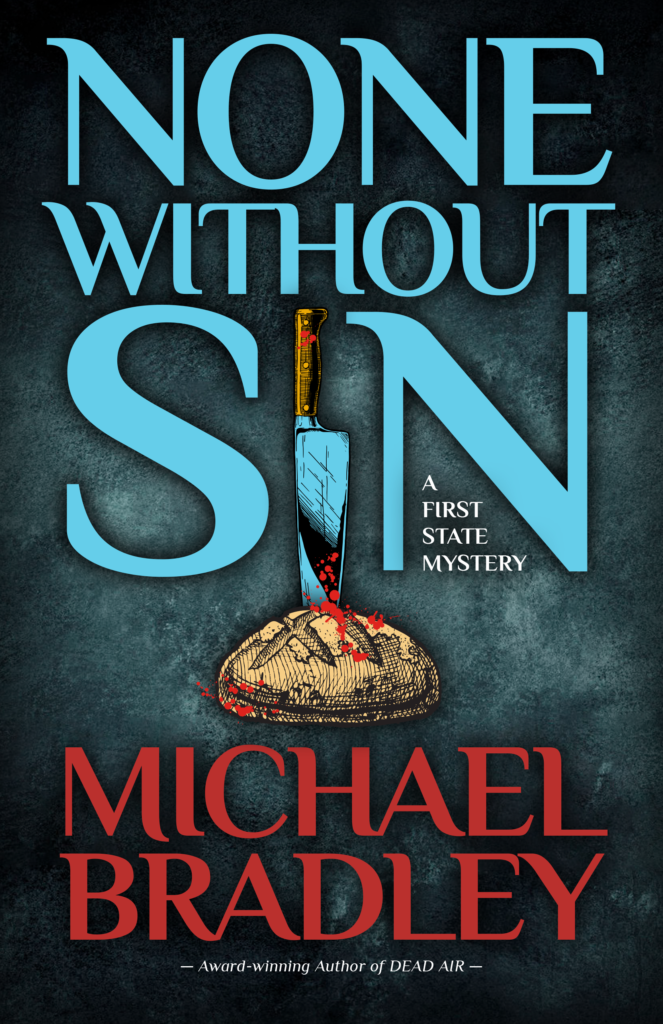 Be sure your sin won’t find you out.

When a Delaware real estate mogul is murdered, newspaper journalist Brian Wilder wants the scoop on the killing, including the meaning behind the mysterious loaf of bread left with the corpse. Reverend Candice Miller, called to minister to the grieving family, quickly realizes that the killer has adopted the symbolism of sin eating, a Victorian-era religious ritual, as a calling card. Is it the work of a religious fanatic set to punish people for their missteps, or something even more sinister?

As more victims fall, Brian and Candice follow a trail of deceit and blackmail, hoping to discover the identity of the killer—and praying that their own sins won’t catch the killer’s attention. 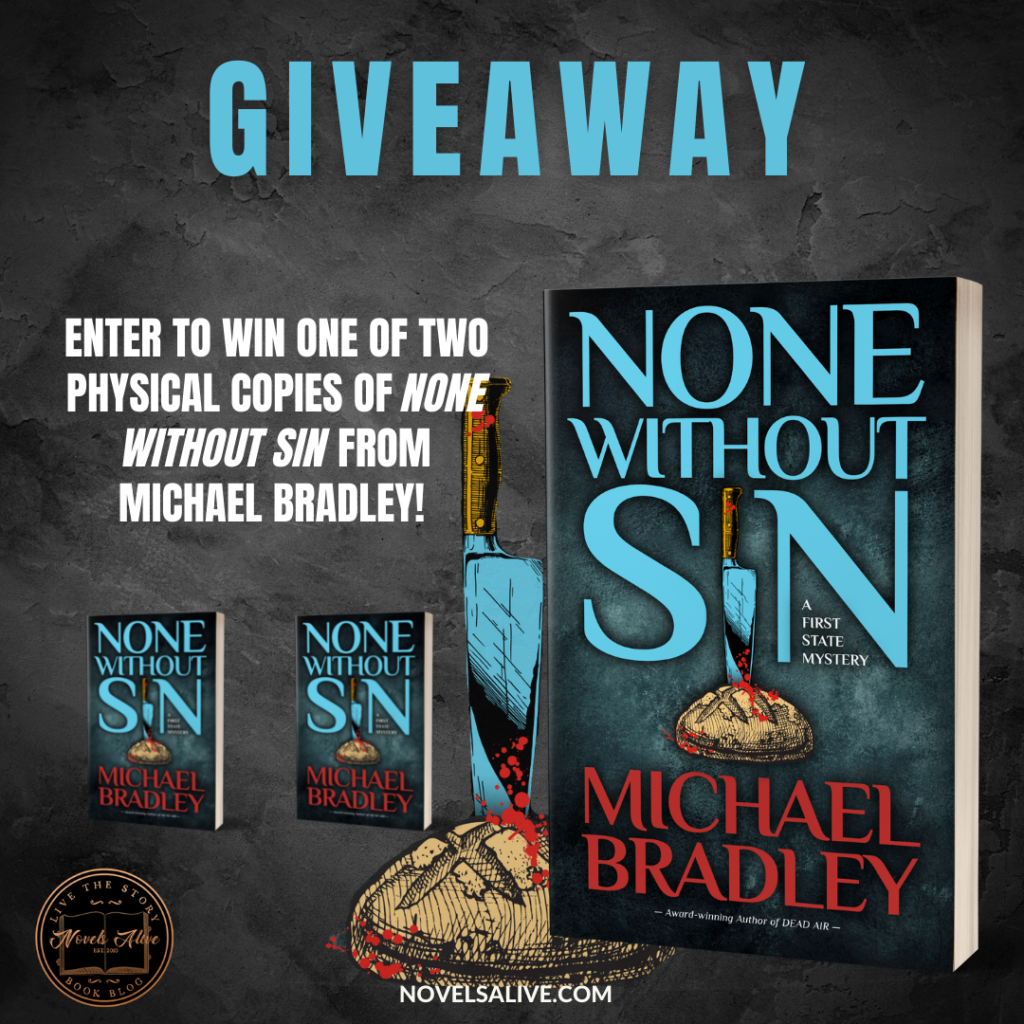 This is a giveaway hosted by Partners in Crime Virtual Book Tours for CamCat Books & Michael Bradley. See the widget for entry terms and conditions. Void where prohibited. 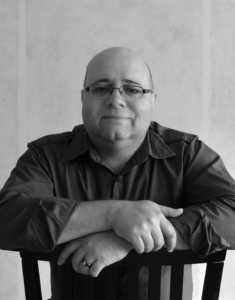 Michael Bradley is an award-winning author from Delaware. He spent eight years as a radio DJ “on the air” before realizing he needed a real job and turned to IT. Never one to waste an experience, he used his familiarity with life on the radio for many of his suspense novels. His third novel, Dead Air (2020), won the Foreword INDIES Award as well as the IBPA Benjamin Franklin Award.