She thought she’d escaped her past…

Has it caught up with her?

Erika Powell has lived in hiding for years to protect her son from his wealthy, tyrannical grandfather. Wary of strangers, she’s suspicious of James West, who’s renting a neighboring cabin, despite their sizzling chemistry. But when attempts are made on Erika’s life, James fears he may have endangered her—because the undercover PI’s investigation of Erika may have led someone dangerous right to her. 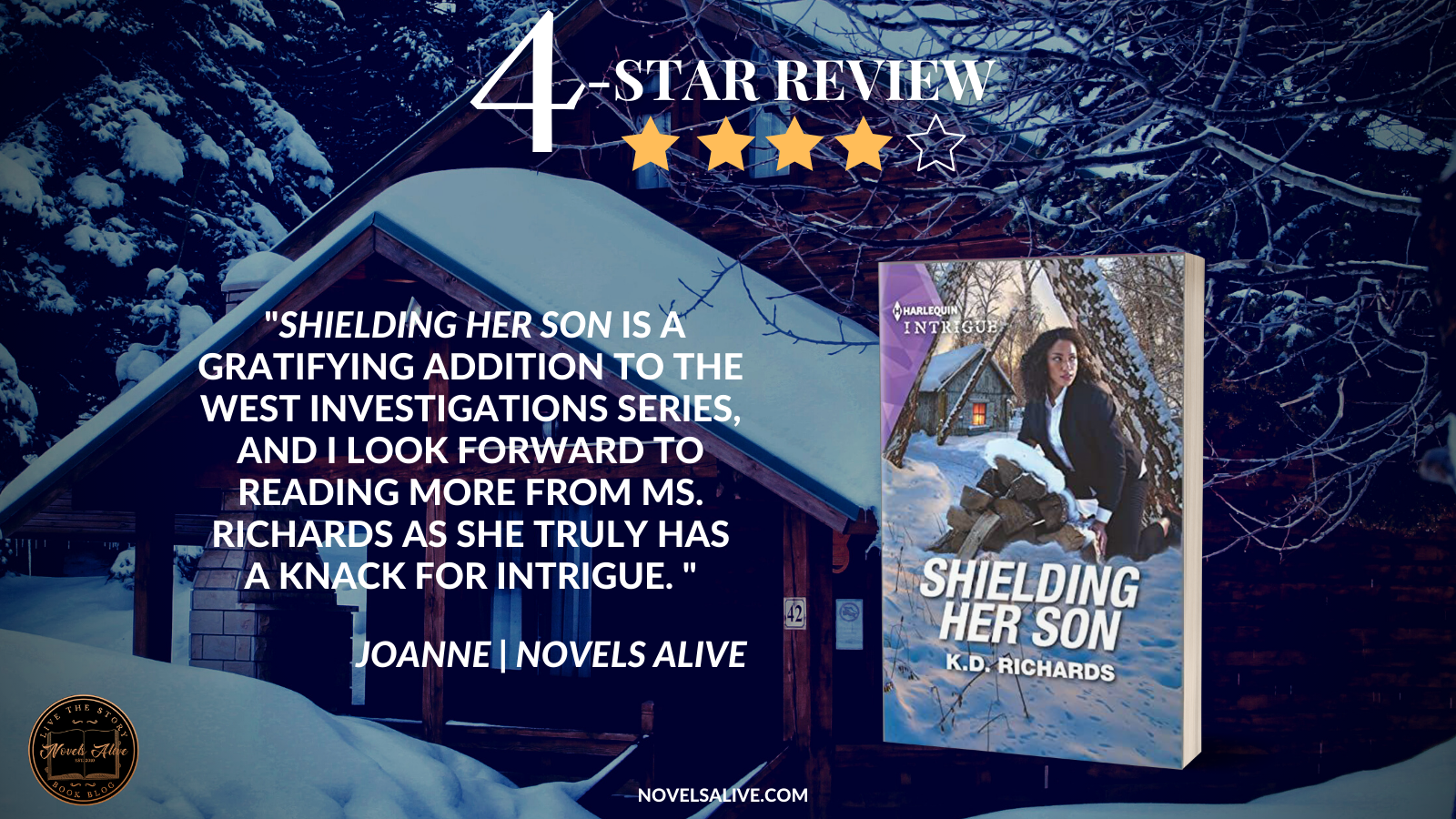 Books in the Harlequin Intrigue line always hold my interest and Shielding Her Son by K.D. Richards did not disappoint. We try to figure out whodunnit with all the bad things happening at Erika’s home and property.

Shielding Her Son is the fourth book in the West Investigations series and only the second I’ve read in the series. I hope to go back and read the first two books I’ve somehow missed. The cast of characters at the beginning of the book was helpful.

Erika is trying to open her bed and breakfast in the small tourist town of Carling Lake. The owner of similar businesses in town, who also happens to be the mayor, is not happy about it. When others back out of their deals, Erika doesn’t know which way to turn.

Erika has secrets from her past that no one in the small town knows about, or do they? She is also a part-time journalist for the small town newspaper and being a widow with a young son, her life is full.

Having a short-term neighbor in the cabin next door whom she’s attracted to isn’t helping matters, and when he offers assistance to her more than once, what’s a girl to do? It doesn’t help that the attraction seems to be mutual. Erika thinks he’s trying to figure out what to do with his life now that he’s no longer in the military, but he’s really there to do a job—one she’s not privy to.

The story twists and turns as dangerous acts unfold and escalate. Unfortunately, Erika seems to be the target. Good thing she has the police on speed dial, and her ex-military neighbor is always willing to help.

Multiple stories are revealed and are smoothly woven together. There are plenty of secrets and people who are not as they seem. The story had my heart pumping several times throughout, but other times, the events were anticipated even before they happened.

There was closure and the expected happily ever after happened too quickly for me, given the chaos. An epilogue would have been nice unless there are plans for the series to continue, and we’ll meet up with them again.

Shielding Her Son is a gratifying addition to the West Investigations series, and I look forward to reading more from Ms. Richards as she truly has a knack for intrigue.

K.D. Richards was born and raised in the Maryland suburbs just outside of Washington, D.C. A writer since a young age, after college Kia earned a law degree and worked as an attorney and legal instructor for fifteen years but never stopped writing fiction. She currently splits her time between Toronto and Maryland with her husband and two sons.

July 26 – My Journey Back – SPOTLIGHT

July 30 – Escape With Dollycas Into A Good Book – AUTHOR INTERVIEW

4-STAR REVIEW: Shielding Her Son by K.D. RichardsShielding Her Son is a gratifying addition to the West Investigations series, and I look forward to reading more from Ms. Richards as she truly has a knack for intrigue.