Novels Alive and Be My Bard.com would love for you to join us in welcoming New York Times and USA Today Bestselling “Multi-Genre” author, Sophie Jordan!

For me it’s always the characters, usually just the protagonist … and then the plot derives from WHO/WHAT that character is.

Oh, that’s tough. Like you said, I’m sprinkled throughout. I can’t tell you how many characters I’ve written with a penchant for Tex-Mex food!

Most of the major “villains” I write are complex… never all bad. They’re colored by the gray in life, not black and white. You might think they’re one thing from your first glimpse of them, but they are usually more layered after closer inspection.

Probably FIRELIGHT … for the fantasy aspect. The world of the draki would be a magical and wonderful place to visit.

Oh, probably HARRY POTTER … again for all the magic and fantasy aspect.

Hm. Well, I definitely don’t worry that I’m going too far! Truly, inhibitions have been lowered, and I don’t worry about taboo subjects in my own writing. I just write the story I want to write and that is the most authentic.

Like you said there are so many reviews available. Sometimes I read them (positive and negative), but for the most part I’m too busy. It’s not anything I really feel that I have to “deal” with.

I’m already very varied across genres. I’ve pretty much covered all the ones I want to write in — I write historical, paranormal, contemporary, thriller and near-future, YA, Romance. Hm, fantasy is one I haven’t tackled… so maybe. That’s a possibility.

I’d want my own FIRELIGHT to be adapted, of course. It’s the most cinematic of my work.

I’m working on a new “secret” YA proposal. Something new and different for me that I plan to submit soon. I’m also working on the third book in my new adult trilogy.

Thanks so much, Sophie for stopping by!

Be sure to check out Sophie’s newest historical release, A GOOD DEBUTANTE’S GUIDE TO RUIN (The Debutante Files #1) when it arrives in book stores July 29th, 2014! 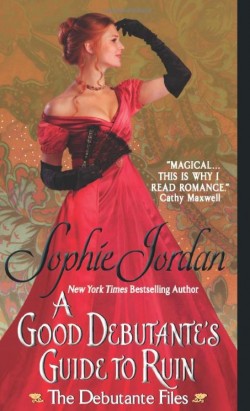 The last woman on earth he would ever touch . . .

Declan, the Duke of Banbury, has no interest in ushering Rosalie Hughes, his stepsister, into society.Dumped on him with nowhere else to go, he’s determined to rid himself of the headstrong debutante by bestowing on her an obscenely large dowry . . . making her the most sought-after heiress of the Season.

But Rosalie isn’t about to go along with Declan’s plans. Surrounded by fortune hunters, how is she supposed to find a man who truly wants her? Taking control of her fate, Rosalie dons a disguise and sneaks into Sodom, a private club host to all manner of illicit activity—and frequented by her infuriatingly handsome stepbrother.

In a shadowed alcove, Declan can’t resist the masked temptress who sets his blood afire … any more than Rosalie can deny her longing for a man who will send her into ruin.

Sophie Jordan grew up in the Texas hill country where she wove fantasies of dragons, warriors, and princesses. A former high school English teacher, she’s also the New York Times and USA Today bestselling author of Avon historical romances. She now lives in Houston with her family. When she’s not writing, she spends her time overloading on caffeine (lattes and Diet cherry Coke preferred), talking plotlines with anyone who will listen (including her kids), and cramming her DVR with true-crime and reality-TV shows. Sophie also writes paranormal romances under the name Sharie Kohler.