Welcome to the 3rd Edition of Novels Alive and Be My Bard.com’s  “10 Questions With…” and we are starting this edition out with an all time favorite, the mega-talented New York Times and USA Today Bestselling Author…Lynsay Sands.

Hmm… I don’t remember what mine said however anyone that actually knew me would have said writer. I was writing stories as soon as I could put words together to form a sentence.

For one thing I often have two or three stories I’m working on at a time so if I get stuck on one, I can leave it and go to another.  This usually helps resolve the block or issue I may be having with the one when I return to it later.

Sometimes I just need a change of scenery. There could be a distraction at home or something’s bothering me and I need to be somewhere else to stop that train of thought. So if I feel the need, I grab a pen and pad of paper and head out to my local coffee shop for a few hours.

And on occasion a block just won’t clear. If that happens then it’s likely due to the fact that I can’t get into my characters enough to fully understand them so have trouble writing about them. This usually results in my having to move on to a different story.

Yikes… The last book I read was THE STRAIN so if I ended up in that, I’d be looking for an escape route IMMEDIATELY. Now if I ended up in a book like ODD THOMAS, that’s a different story. His character can be pretty amusing so I wouldn’t mind being his sidekick for a bit… That is as long as I wasn’t murder victim number whatever in his story!

Actually, the publisher is the one who decides to do re-releases and such. At least they are as far as I know, but I’m pretty happy about the next two reissues coming up… SWEET REVENGE is coming out at the end of November and THE LOVING DAYLIGHTS, my one and only spy novel, is coming out at the end of December. I’ve been told that copies of SWEET REVENGE are hard to find lately so that’s good news. And I really enjoyed writing THE LOVING DAYLIGHTS, not only because it was different from my usual genres but I also had the opportunity to come up some pretty cool spy gadgets for my heroine, Jane Spyrus. <G>

As for revisions… I’ve never changed a story once it’s been published the first time so no revisions.

I’m totally the Martha Stewart type. Even if I have to stay up the entire night before the big event, which I’ve done on more than one occasion, to get everything ready, I do it! Come rain or shine, hell or high water my Thanksgiving dinner is a force to be reckoned with! LOL

My mother, who was one of the biggest influences and encouraged me all along to become a writer. She was far too young when she passed away and has been sorely missed ever since.

I must be a scrambler as I don’t bother looking for gifts until a couple of weeks before. However, I’m not as bad as some (like my sister) who was still looking for Christmas gifts at 5pm one Christmas Eve a few years back! Let’s just say she didn’t get all the gifts on her list. LOL

Jeesh… I don’t think I’ve read a holiday romance story. Watched them but not read. My all time favorite Christmas romance is It’s A Wonderful Life but it’s not a book. So if I have to mention a book then I guess I’d say Teddy Brunswick’s story entitled THE GIFT from the anthology I did with Jeaniene Frost, THE BITE BEFORE CHRISTMAS.

I never make “New Year’s Resolutions”. I don’t think they work. Either you’re going to do something or not. I don’t think the fact that the clock strikes midnight on January 1st makes a lick of difference on whether you keep your promise to yourself or not. Shrug.

My pleasure. Thanks for thinking of me.

As for upcoming books and books I’m working on…

THE IMMORTAL WHO LOVED ME is scheduled to be pubbed on February 24th, 2015. This is book #21 in the Argeneau series and it’s about Katricia’s father, Basileios Argeneau and newcomer Sherry Carne. Many familiar faces are drawn into this story including the gifted but troubled teenager Stephanie McGill, the infamous Basha Argeneau and Marcus Notte just to name a few. This story starts with a bang and never really slows down so if you like nonstop action then you might like this book.

And I have handed in book #22 in the Argeneau series, Bricker’s story, however I don’t have a publication date set for it yet. 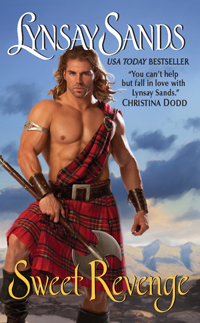 I’m currently working on another story in The English Bride In Scotland series. This one’s about Saidh and Greer. You meet Saidh in TO MARRY A SCOTTISH LAIRD, the second book in The English Bride In Scotland series. Saidh has seven brothers that have always treated her like was just another brother. She can hold her own and prides herself on being able to drink any one of her brothers under the table, parry with the best of them, and put them in their place when necessary. Greer knows he will never again meet a woman quite like Saidh Buchanan so he’s going to make sure he keeps her interested.

I was born in 1142 which is why my first love is historicals. I’ll let you guess why I love stories of immortals…er…well, vampires to you people. When I first started writing the family history, everyone was up in arms, afraid I was revealing too much, but I explained they were being published as fiction and I wouldn’t use real names. Of course, that was before I found I just couldn’t write the stories with other names…

Just kidding! I couldn’t resist. Of course, I’m not a vampire. I wouldn’t mind being one. It would be a heck of a diet and I’m always looking for a successful diet, but despite not being a vampire…well…a gal can dream can’t she? And that’s what books are; waking dreams or stories, tales to amuse, entertain and distract us from everyday life.

I love books. Reading books takes me away to other worlds and on grand adventures I just couldn’t have otherwise. Writing them does the same, but also lets me play God for a bit. I know that sounds weird, but when writing my stories, I decide who lives and dies, who succeeds or fails and so on. I can give the good guys the happy endings they deserve and be sure the bad guys lose and get their comeuppance. Unfortunately, that’s something that doesn’t always happen in real life.

Perhaps that’s why writers write. Maybe we writers are all secret control freaks, wanting to control the world. Or maybe we’re just dreamers lucky enough to be able to make a living at dreaming. Either way I love writing and would do it whether I was paid for it or not. But I’m very very grateful to be able to share these stories with you. I hope they help you escape your troubles and trials if only for a little bit, and I hope they make you smile…You can be certain I’m often chuckling myself silly while writing them. Enjoy! “ ` www.lynsaysands.net