This week Novels Alive and Be My Bard and are extraordinarily pleased to welcome USA Today Bestselling author JENNIFER ST. GILES to “10 Questions With…”

Flowers are sweet, but chocolate is sweeter and would allow me to indulge in all of my senses as I devour it. And LOL if you read WILD IRISH RIDE, HOT IRISH LASS, or even my Shadowmen Series you’ll know I have a great imagination about what can be done with chocolate.

Europe (why limit yourself, right?). First I would go see my name on the Daphne Du Maurier Award plaque at her estate in Cornwall. I’d go see Ireland and experience it firsthand before I delve into Donovan, Daire, Dylan, and Daniel’s stories. I’d breathe in the misty air, on a crisp morning and explore the lush countryside. Of course, I’d wander over to Scotland before I left the lure of the Celts. Then I would go and explore all of the places I’ve researched for A ROSE FROM THE GRAVE, the first book in The Justus Chronicles, my treasure hunting time-travels.

I gleam story ideas and characters from many places, but by the time I process everything in my mind, I don’t have a single person in history that I base my hero or heroine on. There is always a very big part of my heart in my heroines, though. Now, I do confess to using some hunky, real life men to base what my heroes look like….who? Gerard Butler, Stephen Amell, Alex O’Loughlin, James Caviezel, Chris Evans, Chris Hemsworth, Brad Pitt…. Oh I could go on…

Best: NEVER, NEVER, NEVER GIVE UP ON YOUR DREAMS!
I didn’t necessarily receive bad advice, per se, so let me just say my worst belief about publishing was that I had to be published through a traditional (New York) publisher, and I jumped through each and every hoop New York tossed my way…for several years. I thought traditional publishing was the be all, end all.  I wasted too many years just to be able to say I was with a publisher.  Finally, I decided to pull myself out of New York and write what I like to write, my own way, and I’ve never been happier! I’ve also learned you can’t just write the books, these days it’s just as important to share the ups and downs, and the fun and the irony of life with your readers.

Never a tragic ending… even if it would mean money in my pocket. I’ll leave those for book clubs and literary-minded souls to obsess over. I believe love will always triumph. I love happy endings and there aren’t enough happy endings in the world.

Heavens, what hasn’t already been done before? Most classics didn’t necessarily have a happy ending. So I’d take GONE WITH THE WIND (I’m an Atlanta girl). I’d put it in modern times and give it a happy ending. After Scarlet’s “tomorrow is another day scene,” I’d have her realize that her land was richer with Rhett on it. And I’d have Rhett frankly realize that he really did give a damn. (LOL I do have a Frankly, My Dear Series in my Southern Steam Novels.)

A celebratory toast with a big Whoo-Hoo! I might go to dinner with friends, if I can. Then it’s back to the keyboard. I have too many stories in my head begging to be told, to sit idle for long.

I LOVE the ocean, so can I have that haunted castle on the coast, please? With Mr. Tall, Dark, and Handsome to fall in love with. as we solve the hidden mystery. As for the three books…The Bible….and two empty books so I can write more stories.

How about my yet to be discovered love who will share life with me, laugh with me, and enjoy doing things with me, as well as have an understanding and a love for writing story.

Please tell us a little bit about your latest book and what you will be working on next? Just released!

HOT IRISH LASS is a roller coaster ride to love for hardened bachelor James Weldon and independently-spirited, Irish-born Cierra, a woman who won’t settle for less than what she wants in a relationship… no matter how tempting the man.

Currently, I am working on something wildly interesting and different that won a couple of major awards some years ago, but was never published. A ROSE FROM THE GRAVE, is Book One of The Justus Chronicles. According to jaded treasure hunter Nick Justus, love is nothing but a fairytale for fools. The only thing worth taking risks for are the valuable relics he’s sure are hidden just beyond the tunnel’s darkness. But forces in the universe have a different plan for Nick. One that involves a fight for truth and justice throughout time. Will he learn that love is the greatest treasure of all before it’s too late? Or will the pervading darkness conquer the world forever. 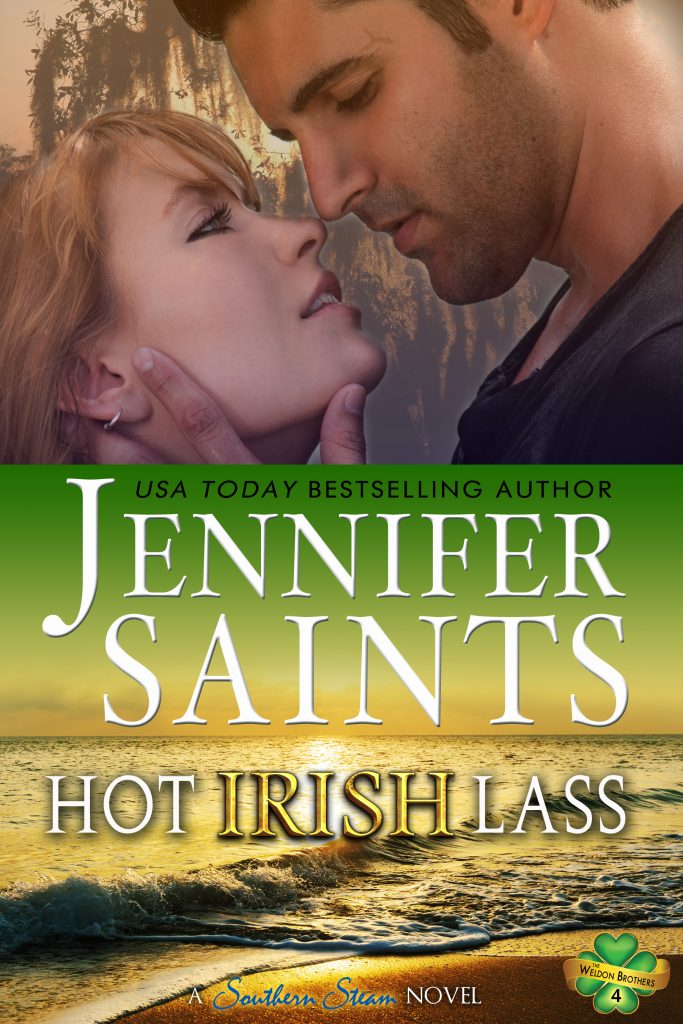 James Weldon likes fast rides, wild women, and to party hard—they go a long way to help him forget the premonition curse he is under. He’s a tried and true bachelor who’s not about to lose his Free Bird kahunas like his brothers. He’s been on a hiatus helping his father after the old man’s brush with death. But his plans to get back into the game at a blow-out St. Patrick’s Day party go awry. James not only can’t find his bachelor’s groove because a certain Irish lass by the name of Cierra Weldon has him off kilter, but he gets hijacked from his Savannah home to Manhattan by his brother’s top security investigator. They want him to determine if that Irish Lass has ties to terrorists. James knows Cierra is a lot of things, perfect being one of them, but she is not a terrorist. That doesn’t mean she isn’t being used by one. Her association to billionaire Sheik Hassan al Zayed puts her under suspicion.

The moment James hits New York and connects with Cierra, a whirlwind of events unfold– one of them being a premonition about Cierra. He fears for her life and finds himself sacrificing everything to keep her safe. Even his heart that she somehow managed to steal when he wasn’t looking.

Horses are Cierra Weldon’s life. She may have grown up privileged in a castle-like estate in Ireland, but life hasn’t been necessarily easy. When she was sixteen, her parents were killed in a car accident. She took over running her father’s racing and stud farm then and now, after eight years, she is looking to expand by establishing a breeding and training farm in the United States—mainly to escape her FOUR overbearing, overprotective brothers. She hasn’t found the right place. Her current troubles started when she told Hassan she wasn’t interested in his gilded cage. She was stalked, attacked, and now her prized racehorse in Ireland has been stolen. She’s sure Hassan’s behind it, trying to show her how much she needs him.

She concocts a fake engagement with James, hoping Hassan will see she’s taken, and “miraculously find” her stolen horse for her.

James shows up. Not only does her world go to hell in a handbasket, but her heart falls hard for a man who thinks commitment is a prison sentence.

They say life can change in a blink of an eye. What can happen in seventy-two hours?