INTERVIEW: Eileen Dreyer and THE PRINCESS AND THE PEA With Giveaway

Previous articleIntroducing Alissa Johnson’s A TALENT FOR TRICKERY and Giveaway
Next articleWITHIN A CAPTAIN’S HOLD by Lisa A. Olech With Giveaway

Where did you get the inspiration for your series/book?

THE PRINCESS AND THE PEA is actually a sequel to my book A PRINCE OF A GUY. As you may have guessed, the series is my foray into royalty, in which I invented a fictitious principality in the Alps so I could put its royal family at risk and help its members fall in love (which was just as much fun as I hoped it would be).

PRINCE actually began as my homage to the movie The Prisoner of Zenda, in which a foreigner has to impersonate a royal to thwart a plot against his life. Well, I couldn’t help inject a little humor in things, so in PRINCE the petulant brat of a royal princess who is kidnapped on the eve of her coronation is impersonated by a secretary from Brooklyn (and yes. I had a great time sending up royal protocol).

Well, after that ended well, I was left with an extra princess. Inspired by one of my favorite books, A Dedicated Villain by the wonderful Patricia Veryan, I wanted to see if I could turn the villain from one book into the hero(or heroine) of another. In this case, my original royal princess, now robbed of her throne, redeems herself as she runs from real villains with Paul Phillips, another retiree—although his retirement is from the spy game. The love scene with the Oreo cookies, however, is completely mine.

If the apocalypse happened, which of your heroes &/or Heroines would you want to have on hand to help you survive and why?

PRINCESS AND THE PEA is the perfect book for this question, because my hero, Paul Phillips is a recently retired government spy with a great car and a leather jacket—and not only all of those survival skills spies have, but the weaponry. Okay, and he’s also ruggedly handsome. I mean, just because we’ve suffered an apocalypse, it shouldn’t mean that the guy I’m relying on has to be ugly.

If you were not writing, what would your profession be?

I wish I could say Broadway musical star. It was my first aspiration. The truth is, though, that I would have gone back to trauma nursing. I did love my work and the people I worked with and took care of. The Queen of ADD here is also a bit of an adrenaline addict, so the pace and high stakes also fit me quite well. The difference between that and writing is that now I’m always in control of how things turn out. And my feet don’t hurt so much.

What is your go-to snack or meal when you are on deadline?

Chinese take-out every time, particularly pot stickers and garlic chicken. I can rationalize that it’s not bad for me, like Cheetos. 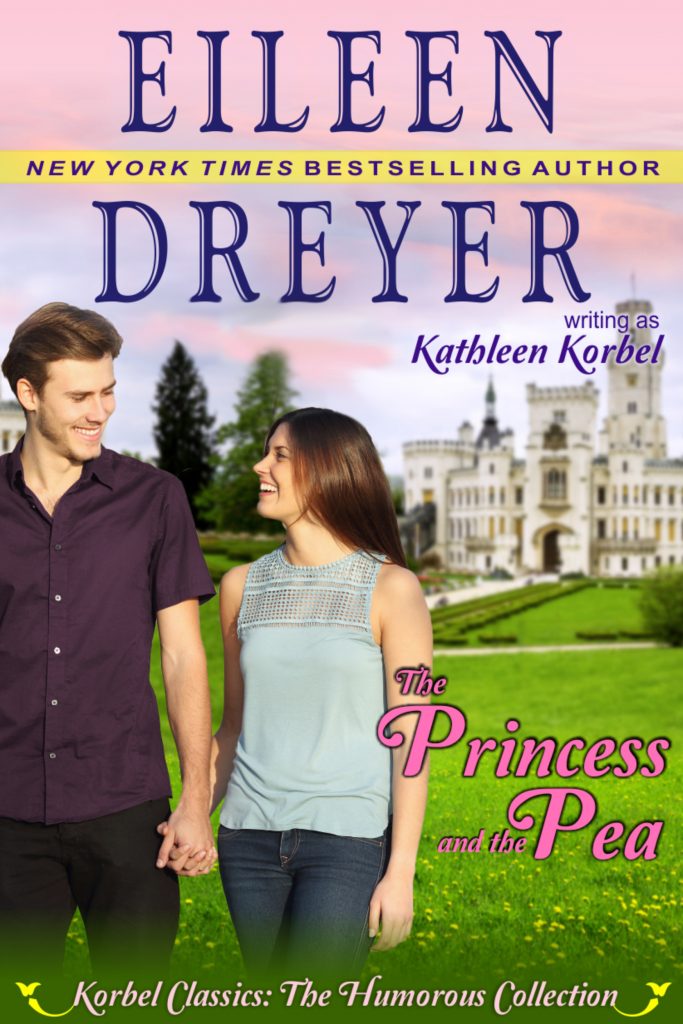 Moritanian Crown Princess Cassandra leads a fairy-tale existence. Some consider her the most spoiled woman in Europe. Then she is kidnapped.

Retired spy Paul Phillips is a self-made man more at home with flying bullets and fast cars than champagne and caviar. Then he finds Crown Princess Cassandra.

Now speeding through Europe, the pair are ducking enemies and each other. But as sparks fly, they wonder if they might be driving toward a fairy tale ending.

2015 sees Eileen enjoying critical acclaim for her foray into historical romance, the Drake’s Rakes series, which Eileen labels as Regency Romantic Adventure that follows a group of Regency aristocrats who are willing to sacrifice everything to keep their country safe. She is also working on her first non­fiction book, TRAVELS WITH DAVE, about a journey she’s been taking with a friend’s ashes.

A retired trauma nurse, Eileen lives in her native St. Louis with her husband, children, and large and noisy Irish family, of which she is the reluctant matriarch. She has animals but refuses to subject them to the limelight.