INTERVIEW: Mitchell James Kaplan on INTO THE UNBOUNDED NIGHT and Giveaway

Previous articleBOOK BLAST: THE MATCHMAKER AND THE MARINE by Lucinda Race
Next articleGUEST BLOG: Should Right Or Wrong Override Family? by Kruze and Giveaway 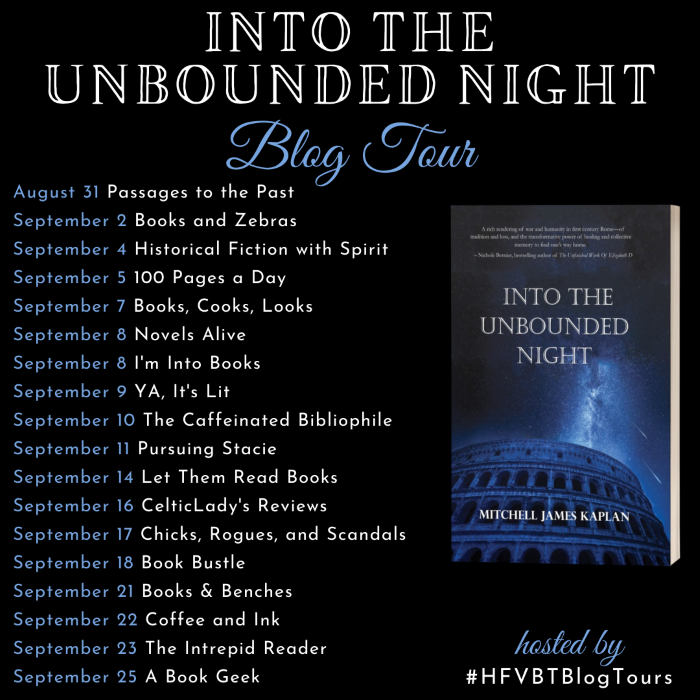 Welcome to Novels Alive! We’re honored to have author Mitchell James Kaplan on our site today.

Your latest novel, INTO THE UNBOUNDED NIGHT, released on September 1st, is a historical fiction set in the first-century Roman empire.

How challenging was it to research first-century Roman empire?

It wasn’t challenging at all! I did most of the research before I started writing the book, or even thinking about doing so. I was curious about the period in which Christianity came into being as a cultural force. This area of curiosity led me into other areas, which in turn led to others, and soon I heard characters speaking to me. The first was a pagan, caring for her disabled child on the streets of Rome…

Thinking of your characters, Aislin is a refugee from Albion, how could her story resonate with people today?

In all the ways that matter, people are people across all nations and epochs. The forces that affect us most powerfully—grief, melancholy, the desire for acceptance or recognition, love, the lust for power, and other primal emotions—are universal. The physical circumstances of people’s lives do differ from place to place and from time to time, and I find those differences fascinating.

Did writing INTO THE UNBOUND NIGHT strengthen or change your perceptions of religion in general?

Absolutely, and in many ways. A couple of examples:

As I researched and wrote INTO THE UNBOUNDED NIGHT, I increasingly came to think of religions as, first and foremost, story-telling traditions. We see the world through narrative, and identity derives from narrative.

Living in these first century worlds, I started to see and perceive the universe through the eyes of first-century people. In particular, the idea that we are surrounded with invisible beings who affect us—“angels” (Greek), “messengers” (Hebrew), or “companions”—came to feel real, and important.

When times are dark, people seek answers and comfort from religion and have for eons. Can you touch on a little of what you discovered in your research?

As a consequence of the research, I came to think of Christianity and Rabbinic Judaism (the form practiced to this day) as variants within one larger set of narrative traditions. I became sensitive to the complexity, diversity, and permeability of these and other narrative traditions in the first century. In all these traditions people sought meaning, a sense of purpose, a sense of belonging to a cultural family, and a way of relating to the non-human universe—animals, the heavens, and the Ultimate Mind behind all appearances.

As a mother of four children, I was particularly moved by your exquisite prose and loving tribute to motherhood and maternal love. I found it quite lovely that you were able to paint such a beautiful picture for your readers. Where did this image of motherhood stem from?

Well, as I mentioned above, Aislin was the first character of the book that started speaking to me. And frankly, I was stunned because I wasn’t even thinking about the pagan world at that point. I had been thinking, primarily, about Judea, the Galilee, and Rome. But the image of this woman fighting for her life, and her child’s, on the streets of Rome, was powerful and I trusted it to take me somewhere interesting. The next thing I knew, I was writing a scene in which a lamb was born and, later, stars were falling.

As I was reading, I felt transported to ancient Rome—albeit safe from the wars and destruction. You write much like a screenwriter would compose a screenplay, painting a visual picture for the reader. Do you have any advice to give new authors on how to hone this most essential craft?

I think about the next day’s scene as I’m going to sleep the night before. I try to visualize everything before I write a word. In the morning, I don’t need to remember specific things—windows, stone walls, whatever I visualized the night before. Any of these objects may or may not actually be relevant to the scene I actually write. But the exercise enhances my sense of place.

Are there any final thoughts you’d like to leave with your readers?

Thank you for asking! Here goes: writing is a kind of magic. These scenes unfold themselves to me, day after day over a period of years, and I try to translate them onto paper. Then they unfold themselves again in your minds, the minds of readers. It is a beautiful pas de deux and I am as grateful for your role as I hope some of you will be for mine.

Thank you so much for joining us today. I thoroughly enjoyed your book and encourage our readers to rush out and buy a copy today!

Thank you for having me. 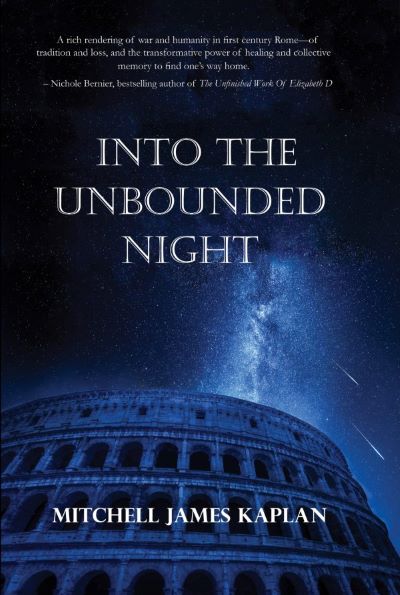 Imprisoned for her efforts to topple the Roman regime, Aislin learns of an alternate philosophy from her cellmate, the Judean known today as the Apostle St. Paul. As the capital burns in the Great Fire of 64 AD, he bequeaths to her a mission that will take her to Jerusalem. There, Yohanan, son of Zakkai, has been striving to preserve the tradition of Hillel against the Zealots who advocate for a war of independence. Responding to the Judeansí revolt, the Romansóagain under the leadership of Vespasianóbesiege Jerusalem, destroying the Second Temple and with it, the brand of Judean monotheism it represents. Yohanan takes on the mission of preserving what can be preserved, and of re-inventing what must be reinvented.

Throughout Into the Unbounded Night, Aislinís, Faolanís, Vespasianís, and Yohananís lives intertwine in unexpected ways that shed light on colonization and its discontents, the relative values of dominant and tyrannized cultures, and the holiness of life itself—even the weakest of lives.

“In Into the Unbounded Night, Mitchell Kaplan offers a rich rendering of war and humanity in first century Rome—of tradition and loss, and the transformative power of healing and collective memory to find oneís way home.”~ Nichole Bernier, Boston Globe Bestselling author of The Unfinished Work Of Elizabeth D

“Kaplanís prose is so rich and agile I felt I was breathing the air of these ancient places, and his evocation of character is no less palpable. Fully embodied and driven by ambition, grief, the clear-eyed desire for truth, and fierce maternal love, these characters plunge, march, and stumble toward their fascinating and entangled destinies.” ~ Marisa de los Santos, New York Times bestselling novelist of I’ll Be Your Blue Sky and award-winning poet

“I’m a big fan of historical fiction when itís as good as Mitchell Kaplanís Into the Unbounded Night. Vividly imagined, Into the Unbounded Night pulls the reader along with beautiful prose, strong characters and a wonderfully realized story.” ~ Heidi W. Durrow, New York Times best-selling author of The Girl Who Fell From The Sky, winner of the PEN/Bellwether Prize

“From the mystical lore of Albion to the Roman siege and destruction of Jerusalem, Kaplanís meticulous research and evocative writing meld seamlessly to create a vivid, textured, and richly imagined story.” ~ Beth Hoffman, New York Times and International bestselling author of Saving Ceecee Honeycutt and Looking for Me

“Set in Rome and Judea after the crucifixion of Jesus, Mitchell James Kaplanís finely crafted and intense second novel delves into the minds and hearts of truly captivating characters. An excellent read.” ~ Eva Stachniak, winner of the Canadian First Novel Award, author of The Chosen Maiden

“Sensually provocative, verbally sharp and critically witted, Mitchell James Kaplanís Into the Unbounded Night brings to life the tumultuous birth of Judeo-Christian monotheism in this intimately woven narrative brimming with righteous and riotous characters striving for survival and transcendence across the ravished landscapes of Judea, the Roman Empire, and Britannia.” ~ Jessica Maria Tuccelli, an Okra Pick winner of the Southern Independent Booksellers Alliance for her debut novel, Glow

During the Blog Tour, we are giving away two (2) copies of Into the Unbounded Night! To enter, please use the Gleam form below.

The giveaway is open to US residents only and ends on September 25th. You must be 18 or older to enter.

Monday, August 31
Review at Passages to the Past

My favorite scene to write in “The Widow Catcher” is the book club scene. It is their monthly meeting, and Delia Frost is invited...
Read more
Historical Romance

GUEST BLOG: Women Geologists of the 19th Century in England by Alissa Baxter Plus Giveaway!

The Earl’s Lady Geologist features a lady geologist, Cassandra Linfield, who lives in Lyme Regis during the Regency period. I was intrigued a few...
Read more
Self-Help

GUEST BLOG: How to Improve Study Habits by Christine Reidhead Plus Giveaway!

There is no denying that studying is never fun. For some, it is almost like turmoil! But none can escape from this and has...
Read more
Sci-Fi/Fantasy

Intrepid warrior angel Malachi faces the fiercest of adversaries of warfare through the centuries, fighting alongside the boldest of gods to defend humankind from...
Read more