Previous articleBOOK BLAST: A BRUSH WITH MURDER by Bailee Abbott Plus Giveaway!
Next articleGUEST BLOG: My Writing Journal by Lena Gregory Plus Giveaway! 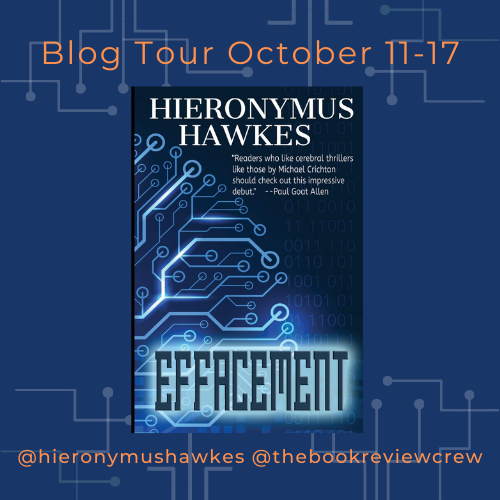 On the first draft, it is often the plot initially. At least in the last couple of books. My first novel was written seat-of-the-pants, so it was pretty much all character-driven. But either way, once I get to actually writing I try my best to get into the head of the POV for that scene and they drive. I have made changes to my outline based on how a scene develops. And honestly, that is where the magic is. I love it when a character surprises me when I’m writing. I have had one try to lead me completely off course. I followed it for a bit but ultimately had to backtrack because they were taking me into a dead-end plotwise.

I’m kind of in the books already, at least parts of me are. I am in a little bit of all of them. I use things I have learned throughout my life to inform the characters. Some are things that have happened to me. Fortunately, we are multifaceted in the real world.

Well, I only have one published right now, so it’s an easy choice, Effacement. It wouldn’t be too challenging, as it takes place 15 years from now. But I think my next trilogy would make a good series, too. It’s a space opera, with vampires in space.

A couple actually. I have plans for a mystery series and I am still working on a plot for a fantasy story.

William Gibson would be at the top of my list. I’ve spoken to one of my favorites, CJ Cherryh, over the phone, but haven’t met her face-to-face.

As with the rest of us, you have a real-life to live.  So, in your most recent book, what was happening in your life and how did it influence your writing?

My wife of 28 years was dying of cancer. Sorry, if that’s a little much, but it was what I was dealing with. I think it added some somberness to certain parts. I hope it added some emotional resonance.

Not really. I do keep everything that I cut in a file, so I still have it. But I cut it for a reason. Kill your darlings they say. I have learned that if your gut is saying it doesn’t work you have to trust it. If you try to skate something through your beta readers to see what they will say my experience has been they will always point it out as problematic. Once you have been through this a few times, stubbornly, you learn.

I read back through the current chapter. Sometimes I go back a little further, but usually, the previous several paragraphs are enough. Currently, I am working on the second book in a trilogy, and I know these characters pretty well.

I read The Avatar, by Poul Andersen well before I should have. I’m sure a lot of it went over my head. I was a young teen and there was sex and same-sex at that if memory serves, and this was in the early 70s. But it was a wild space adventure, before Star Wars. It set me on a path for science fiction early on.

If by that you mean science research, not a lot. But I set it in Madison, Wisconsin, and I’ve never been there. I have friends that do and have, and I picked their brains. But I used a lot of Google-fu, doing research on locations and real businesses and streets and so forth.

That I’m genuine, even though Hieronymus Hawkes isn’t my real name. LOL. I have three grandfathers with the name Hieronymus, though, and I thought it would stand out. And I’m much funnier in real life than in this interview.

Despite a 30-year military career, and being a veteran of multiple conflicts as a pilot, I cry pretty easily. Things that are heroic or strongly emotional. If you go to a sentimental movie with me don’t be surprised if you see tears in my eyes.

I read a piece by Charlie Stross, he is a Scottish science fiction writer, who was speaking at a futurism event in Boston many years ago, predicting what things will look like in the future. He talked about lifelogging and how even now we have the bandwidth to stream it continuously, and I took that and ran with it.

I mentioned it earlier. My next three books are about a vampire that is from our time, but the story takes place many hundreds of years in the future after we have moved out into the galaxy. It’s space opera, with multiple star systems and space combat and a little love and intrigue thrown in for good measure. The first book is basically done. I am writing the second book now and plan to release all three close together when I finish them. I already have the covers done. =)

Thanks for joining us Hieronymus and giving us some insights into you and your new book(s)! 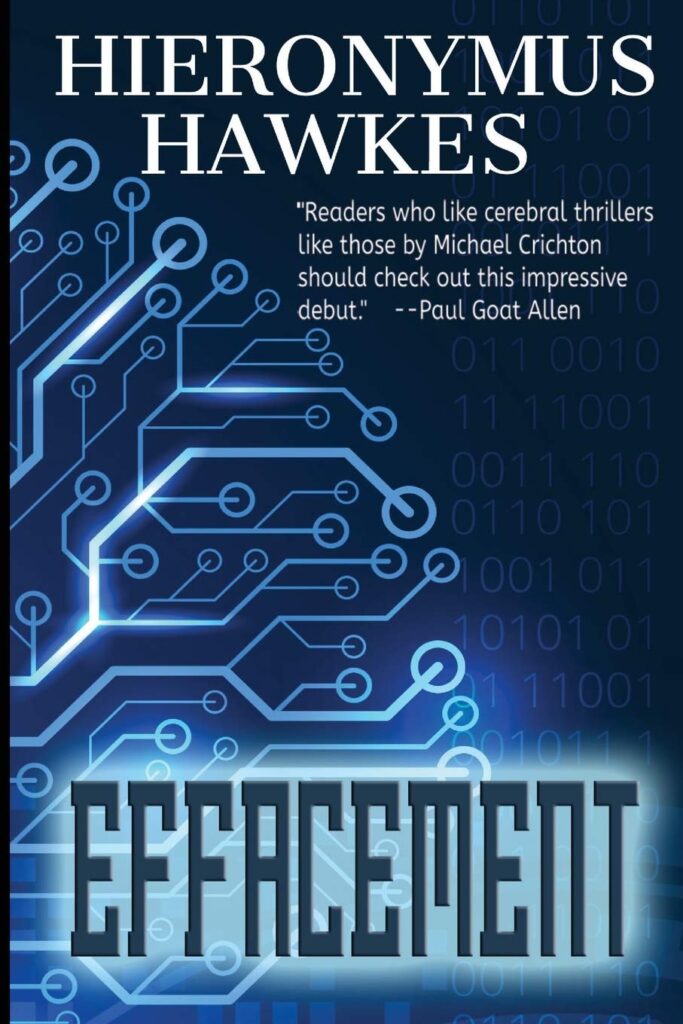 A future where offline privacy is illegal. A lethal plot permanently deleting people in power. One determined genius caught in an assassin’s sights.

2037. Dr. Cole Westbay is proud of having helped eliminate crime. Groomed to take over the company that makes the surveillance chip everyone is required by law to have, he’s alarmed by a series of suspicious deaths the hardware caused. And after launching an investigation, the brilliant scientist panics when he awakes with his mandatory neural link ripped out and his recently recorded memories erased…

Arrested for the federal crime of failing to have his life fully documented, Cole struggles to get back online and clear his name. And as his paranoia grows while the bodies continue to pile up, he fears government enforcers, friends, and even his fiancée may be in on the scheme to set him up for a deadly fall.

Can the embattled scientist crack the conspiracy before his enemies hit CTRL+ALT+DEL on his life? 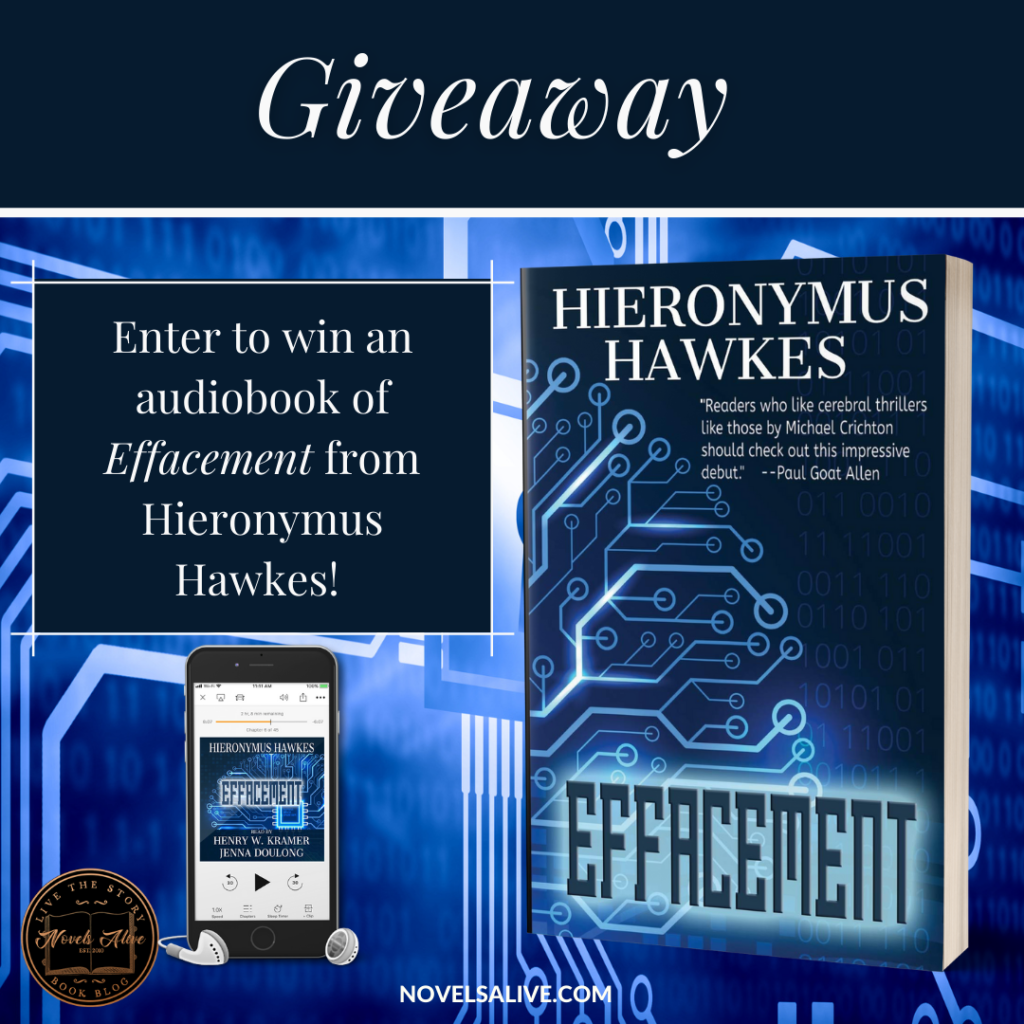 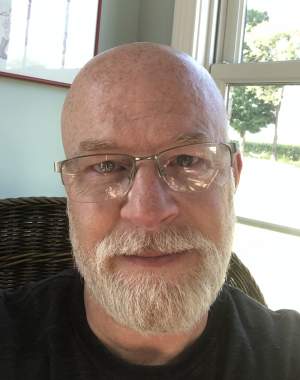 Hieronymus retired in 2018 after flying jets for the Air Force. He has a B.S. in Economics from the US Air Force Academy, and in 2015, he completed an MFA in Writing Popular Fiction from Seton Hill University, which inspired him to publish his debut novel, a sci-fi thriller that explores futuristic technology and nuanced personal relationships. Hawkes has broken the sound barrier, won poker tournaments, and owns several guitars that he can’t play. Now he instructs young pilots in the art of flying, writes fiction and poetry, and sings badly in his car. 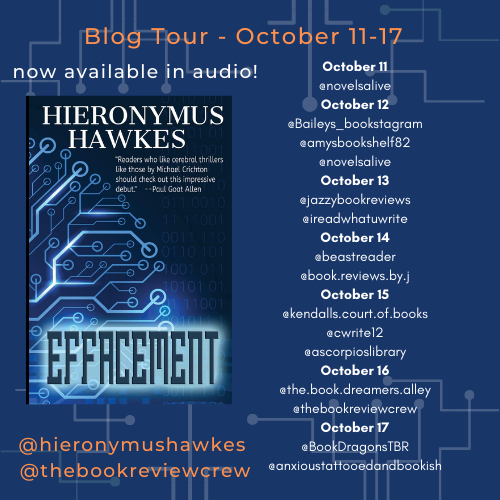