Can they face their demons and find love?

Trent Jacobs had everything he wanted in life until the flash of a muzzle ripped his world apart. Now he only has guilt. Permanently removed from fieldwork due to questionable events, Trent retires from the FBI. He retreats to the small town of Mill Creek, Idaho, to become the town sheriff.

Margaret King knows what it’s like to be alone and isolated. Losing her parents as a child was impossible, but the death of her brother damn near killed her. When a strange van appears on her street and her apartment is broken into, she turns to Trent, the only man she knows she can trust.

After Maggie shows up terrified and haunted, Trent’s guilt explodes. She makes him want things he doesn’t deserve, including her. As their past collides with the present, Trent is forced to face his demons to protect her. Or risk losing her. 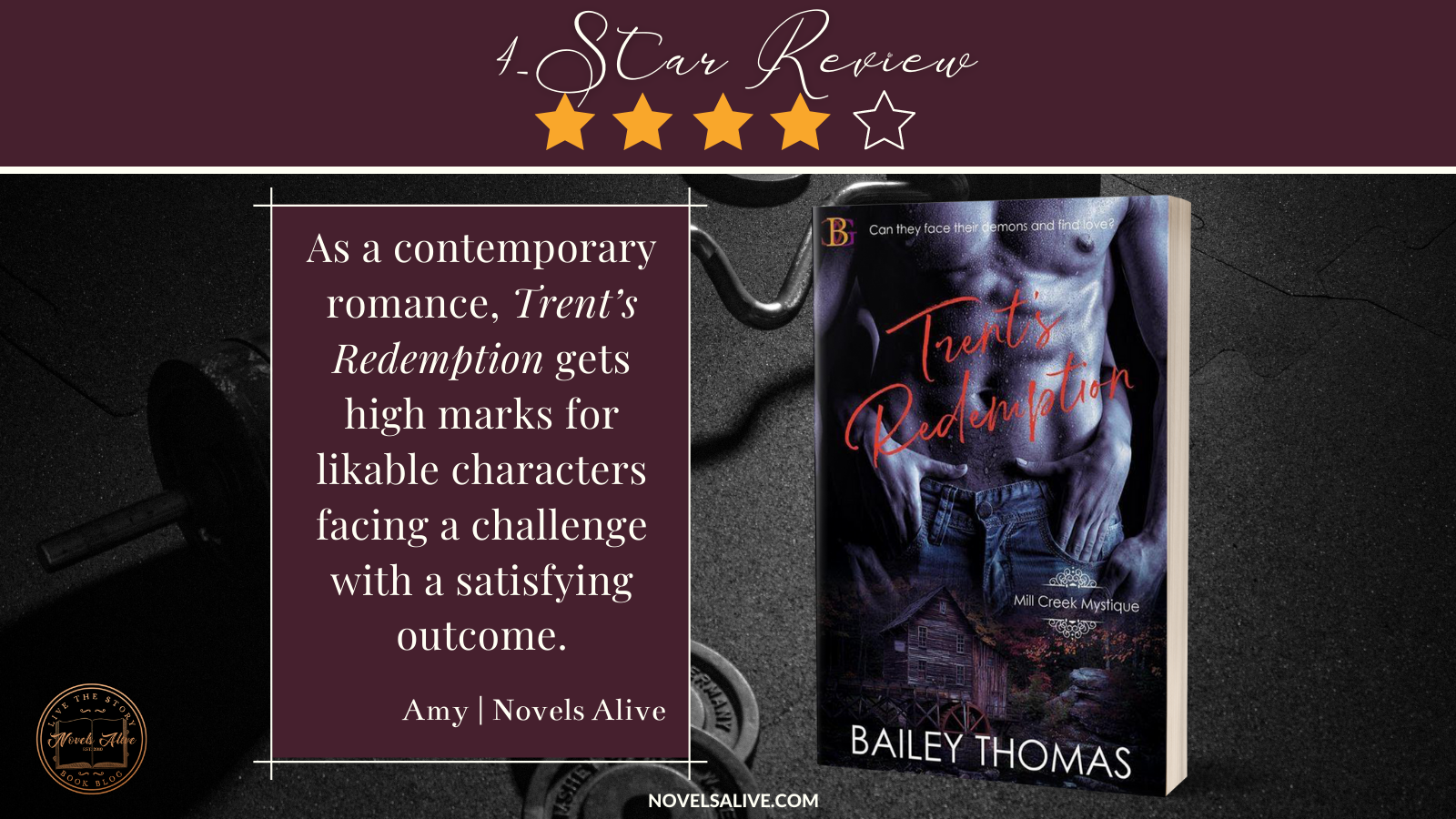 Maggie King thinks her life might be in danger, so she turns to the one man she trusts for protection. Trent Jacobs had promised Maggie’s late brother that he would look out for Maggie, but guilt regarding Dalton’s death has served as a distraction. Author Bailey Thomas builds on this dynamic with Trent’s Redemption, the first book in the Mill Creek Mystique series.

Despite undeniable chemistry between them, Maggie thought Trent had stuck her in the friend zone. Little does she know that he is wrestling with the attraction. With the danger to Maggie thought to be a possible fall-out related to her brother’s last case, Trent is determined to keep her safe.

This story provides an excellent introduction to Mill Creek, a picturesque town filled with interesting characters. With places like Knotty Pine Tree, Rayna’s Outpost, and Two Stepping, the backdrop is perfect for future installments of the series.

The dramatic element is woven well into the storyline, especially as it shifts from Maggie to the man who is looking for her. Talon’s obsession with Maggie is vividly described as he brutally punishes anyone in his path.

As a contemporary romance, Trent’s Redemption gets high marks for likable characters facing a challenge with a satisfying outcome.

Bailey Thomas lives in the beautiful but hot southwest with her husband and their adorable four-legged children. An only child, Bailey’s active imagination and adventurous nature always kept her busy. Now, she channels those creative powers into storytelling.

Her wonderful husband encouraged her to chase her dream of becoming an author and continues to be her greatest champion. Being able to write these stories has been a thrilling experience that is truly special to her.

When she’s not behind a computer working on her next deadline, she’s reading her favorite authors, playing with her fur-babies, and spending time with her husband. They love to watch movies, sports and play all types of games.

October 29 – B for book review – Excerpt