Previous articleBOOK BLAST: RIP TO THE RESCUE by Miriam Halahmy and Giveaway!
Next articleCOVER REVEAL: IF THE BROOM FITS by Sarah Sutton

I didn’t think I could write stories until I became an adult. Although characters and scenes played out in my head when I was growing up, they never continued through an entire plot line. Usually they were connected and inspired by a movie I’d loved.

After I married and had a family, this changed. One year, I had three part-time jobs and was taking a college course. As I cooked supper and ran into the other room to move the laundry from the washer to the dryer I realized I needed a little entertainment in my life. That was when I headed to Annie’s Bookstore.

I’d read a lot, but not romance. Like everyone else, I was familiar with the negative comments about the genre, but I liked their happy endings when producers turned them into Rom Coms. They gave me a lift. So, I entered the shop determined to purchase this kind of novel. I uncovered the works of Lindsey Johanna, Elizabeth Lowell, Jude Deveraux and others on the shelves. I devoured them. On the pages, I met ordinary and extraordinary people with problems they overcame and enjoyed joyful and healthy relationships. I returned to the store again and again. I also picked up the Romantic Times Magazine, the hot periodical of its era. Inside, I discovered an ad by Kathryn Falk: You too can be a romance writer.

Wow, yes, this was meant for me. I sat down and wrote. Looking back, well that attempt had lots of problems. First, my tale took place in the colonial period, a historical dead zone for sales. Second, my hero and heroine married halfway through the book. Unknown to me, this created different conflicts and goals. I won’t bore you with other details. My manuscript wasn’t close to a best seller. In fact, it didn’t sell.

But I was determined. I joined the Romance Reader and Author groups on the internet. Soon I heard about RWA and became a member. Then, I chanced upon Terry Pino from Massachusetts. She belonged to the New England Romance Writers Chapter (NEC). She encouraged me to join. I drove two hours to the meeting and encountered a whole crew of scribes face to face. I learned a ton from them. They had speakers on craft, motivation, process. Many critiqued for me and pointed me in the right direction with my story. Others chatted about what they’d read or the latest on what was selling. I appreciated all of them and didn’t mind the trip for that once a month get-together.

Near the end of my first year, the NEC board had a big announcement. They’d lined up Editor Kate Duffy from Kensington Publishers as our May presenter. Kate lived in New York, but grew up in Massachusetts. She was visiting her relatives and would take an hour to talk to us during her vacation. At this time, there was only one way into print, (no ebooks then) and that was by a traditional press. You had to have an agent or an editor. So Kate’s visit was super important.

I recall little of what she said that day, except she pledged to do her best to help anyone from our chapter get published. As soon as I arrived home, I mailed Miss McNeal’s Pirate to her.

A few weeks later, I received a letter from Amy Garvey, a co-worker of Kate’s. She had my submission. Now the countdown started. Would she buy it or pass? Odds fell on the rejection side because of the huge competition. Some people advised that the longer it took to get a response, the better. It meant the reader was mulling your words over. Others said a delay signaled that Amy was swamped and hadn’t read it yet. A few believed a long wait for an answer from a publishing house was a sign the manuscript was lost, and I should prepare a second copy.

Three months went by in silence. Then, I found out Amy had agreed to take pitches at the NEC Conference in Boston. I signed up. I still remember standing in the line for my appointment. Most of the women were chatting about the contests they’d won. My throat tightened. What was I doing there? I had nothing special to say. Finally, I trudged into the room. I introduced myself. Amy stared at me.

Oh, no, this was not good. I sank into a chair. She asked me how I happened to be at the conference, and I explained I’d registered to meet her in person since we’d been in contact.

Amy revealed she’d been startled when I appeared because she was thinking about calling me about Miss McNeal’s Pirate. And there I stood.

Okay, it was slowly dawning on me that she was interested in acquiring my story for one of Kensington’s lines. I thanked her and walked out. I screamed, “I sold my book!!”

Now, you’ve heard about my journey, and I’ll leave you with a bit of advice. If you want to be a writer, work hard, keep working, despite the obstacles, and soon, I’ll be reading how you achieved your dream. 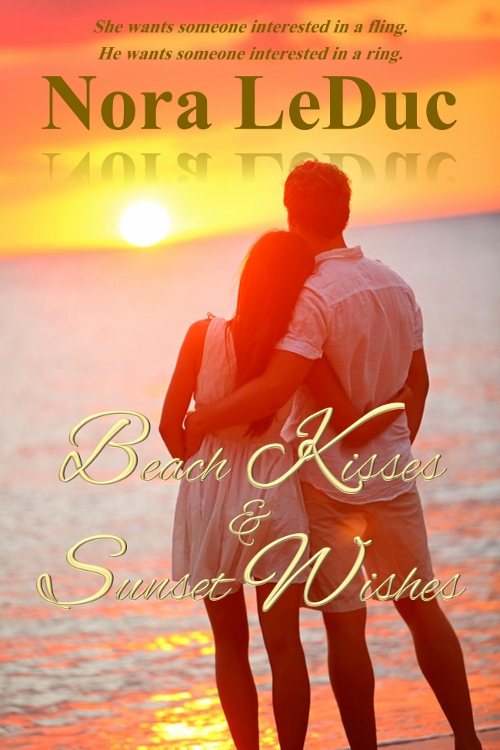 LAST CHANCE BEACH is the island paradise where dreams go to live again and wishes may come true. It’s Summer’s End on the island, and the cottages, condos, hotels, and bungalows are filled to capacity.

Throw a log on the beach bonfire tonight and celebrate LAST CHANCE BEACH: Summer’s End, a special collection of 14 short stories from bestselling authors—all new, never published before—that will thrill the hopeful romantic in you. Some stories are sweet; some are sizzling hot. All will touch your heart and make you want to book a vacation to LAST CHANCE BEACH!

Can a chef and a hot dog loving cop resist desire when they’re forced to share the same overbooked beach cottage?

Their lives are all planned out—until they’re not.

Can they re-ignite what they once had and take a last chance on love?

Will the solution to her dilemma drive them apart or into one another’s arms?

That One Summer by Maddie James, Amazon Top 100 Author

Can she turn back the clock to save her marriage?

Of all the beaches on the coast, who does she see again? Him!

What happens in Vegas doesn’t always stay there

She can run, but can she hide?  Will love still find her?

Life takes you down many winding paths. Will theirs lead to love on Last Chance Beach?

Fragrance and love cannot be hidden.

Dreams of the Past by Laura Hunsaker, Award-Winning Author

Can dreams of the future erase her nightmares of the past?

Frankie McKinley’s last three relationships went up in flames. Her best bud insists she needs to relax, have a fling. But Frankie’s not into casual hookups. She vows to resist the lure of romantic Last Chance Beach and take a break from men. She’ll concentrate on her dream, opening a gift shop. Or so she’d promised herself until the morning her gaze locks with the handsome Sean Thomas-Michael’s sea-blue eyes.

Things aren’t always what they seem.

Nora LeDuc will be awarding a $25 Amazon/Barnes & Noble Gift Card to a randomly drawn winner via Rafflecopter during the tour.

Nora grew up in rural New England where she currently lives with her family. She enjoys visiting and spending time with her friends, the Winettes, in Florida, where she continues to write. Her current book, Beach Kisses, Sunset Wishes is her seventeenth. In October, Christmas at the Easy Breezy will be released. You can find Nora on Amazon, Goodreads, Facebook and her website: Noraleduc.com. She also contributes to the Romance Gems’ Blog every month.