Previous articleCOVER REVEAL: BACULUM by Christina Bauer and Giveaway
Next articleINTERVIEW: Donna Scott on SHAME THE DEVIL Plus Giveaway

Novels Alive welcomes author USA Today Bestselling author Sydney Jamesson today as she explains how she comes up with the titles for her books.

A Piece of Prose by Any Other Name…

In truth, a title alone never turns a mediocre story into a bestseller, but an exceptional story can turn a title into a pungent, household name.

Even so, like most authors, I agonise over my titles, juggle words, scroll through my thesaurus, and check out what’s selling on Amazon. Remember when the word ‘Girl’ was everywhere?

With all my books I try to come up with original titles, whenever possible, or to choose a line taken from the novel which encapsulates the story. The title for my psychological suspense, THE DARKEST CORNERS came from a line of narration in the novel.

When Maxwell Grant my anti-hero was planning on paying Sam, the scheming antagonist, a visit he, said: “I had spent four years, maybe even longer, on the inside looking out, seeing little further than the end of my nose; meeting Sam made it possible to look inside, into the darkest corners of the human psyche.”

When I read that line, I knew it fitted the book perfectly. Throughout the novel, all the characters have secrets and reveal a little more about themselves and their motivation for doing what they do, chapter by chapter. As with good psychological suspense, nothing is as it seems, and the reader is left wondering just who to believe—who, psychologically, has the darkest corners…

In my books soon to be released, THE DUTY BOUND DUET, the female protagonist, Emily Parsons dictated what the title of book one had to be through her dialogue, I decided on book two.  DUTY OF CARE is not only a formal assertion of responsibility, it’s a way a mature person accepts accountability.

From being a child Emily had taken it upon herself to be her younger sister’s bodyguard and benefactor; she made her mother a promise on her death bed to take care of Rita and never leave her and yet, because of what happens to Rita, she feels she has failed to keep her promise. Emily is guilt-ridden, believing she has let her sister down. The only way she can redeem herself is to seek retribution and put things right.

A good title can also work on another level if you think it through. In this instance DUTY OF CARE reflects how Emily feels about preventing not only her sister’s suffering but other young and beautiful girls who have been caught up in the Dark Web of lies and deceit from suffering a similar fate. She sees herself as their savior, too.

The follow on book, THE CARETAKERS is an obvious title reflecting how the key characters introduced in the first book are willing to take care of ‘business’—you will have to read the duet to know what that dreadful business is…

On her death bed Emily Derbyshire’s mother made her promise to take good care of her little sister. Keeping her promise, twelve-year-old Emily did exactly that and became five-year-old Rita’s benefactor and bodyguard. After eighteen years of sisterly devotion Emily receives some shocking news! Rita has committed suicide. When disturbing details start to surface, Emily puts her highflying career on hold to seek out those responsible. She hires an American private investigator Robert Blackmoor; a motorbike riding, no-frills, computer hacker who will use any means necessary to unearth the truth. Not surprisingly, Robert uncovers secrets from Emily’s troubled childhood and chips away at the glossy veneer of deceit which masks the truth behind, not only Rita’s life, but Emily’s imperfect life too. Together they assemble the pieces of a sinister puzzle, revealing a cruel and corrupt world of exploitation and murder: a Dark Web into which Rita has become entangled. As dark forces encircling Emily tighten their grip, and with everything to lose, she must make a life and death decision that she may live to regret.

Emily Parsons is a product of a difficult childhood: self-reliant, fiercely protective and willing to do whatever it takes to safeguard the wellbeing of those in her care. She has even slayed a monster, or two … or three in the name of poetic justice, and yet she is haunted by the image of a beautiful blond girl. Sixteen-year-old Louise Travis has been abducted. Louise’ fate rested in Emily’s hands, but she let her slip through her fingers like gold dust, only to be swept away by a malevolent band of brothers. By once again enlisting the help of computer hacker, Robert Blackmoor, Emily must find Louise before she is lost forever in a Dark Web of heinous crimes, cruelty and corruption. The clock is ticking, and Emily’s investigation is drawing the wrong kind of attention, but she will not back down. She is duty bound to protect those she loves. With skeletons from her past being unearthed, who can she turn to, and who can she trust with her own sinister secrets? 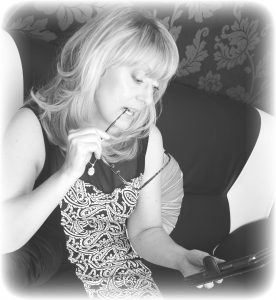 Sydney Jamesson is a USA Today bestselling author by night and an English teacher by day. She is nocturnal by nature and loves nothing more than staying up late, listening to music and being inspired to write. She has always written creatively; in her home is one enormous wastepaper basket full of discarded phrases, opening lines and pieces of dialogue that have hit her like lightning in the middle of the night. Her USA Today bestselling trilogy, THE STORY OF US sold worldwide, and she has been thrilled to continue Ayden Stone’s and Beth Parker’s epic love story in The Story of Us Series: Into the Blue, featuring Blue Genes, Blue Hearts and Blue Moon.

More recently, Sydney has focused on psychological suspense. THE DARKEST CORNERS was her first venture into the new genre: a complex love story filled with lots of angst, emotional scenes and edge of your seat suspense as a single father and a troubled young woman confront their deepest, darkest fears together. The twists come think and fast and the ending is unforgettable!

In her latest novels, DUTY OF CARE and THE CARETAKERS – THE DUTY BOUND DUET -readers explore the seedier side of the Dark Web; witness abduction, human trafficking, and a devoted sister’s willingness to do whatever it takes to safeguard the wellbeing of those in her care. It’s a real page turner, filled with incidents which are heart-breaking and heart-stopping in equal measure!