INTERVIEW: Donna Scott on SHAME THE DEVIL Plus Giveaway

Previous articleGUEST BLOG: THE DUTY BOUND DUET by Sydney Jamesson and Giveaway
Next articleBOOK BLAST: SHE’S THE ONE WHO THINKS TOO MUCH by S.R. Cronin and Giveaway! 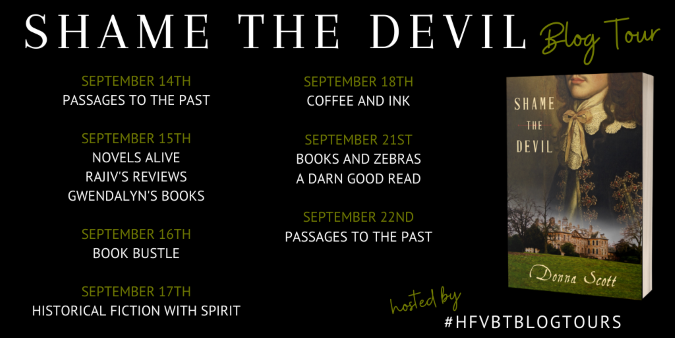 Hi Donna, and thank you for joining us on Novels Alive today!

Your book SHAME THE DEVIL, released May 11, 2020, of this year, came out to some rather spectacular reviews. How long did it take you to research the Civil War in England between those who supported King Charles and those who would rather see him dead?

Thank you so much for having me!  I do a ton of research that starts a little before I begin writing and continues throughout the process.  There have been times when it has taken me three hours of research to write only one sentence because I want to get the scene right. But the truth is, I have been a history-lover—specifically of Western European history—for as long as I can remember, so I came into my experience as a writer with a fairly strong base of knowledge.  That’s not to say I don’t get it wrong sometimes.

The book is listed under Historical Fiction, but clearly, there is a love quotient in the book as well. How much of a factor does love play in the book?

Good question! Although Shame the Devil is not a romance, it certainly has romantic elements in it. The common thread throughout the novel is definitely the love between the two main characters, but love plays a huge role in this novel outside of that—love of king and country, love of family, and love of power. In some cases, love is used as a weapon between characters and can even be lethal.

In the case of the Blackburnes, their lives were turned upside down when they became indentured servants.  In Scotland, Gavan was a laird or landowner and had considerable wealth, property, and prestige, but in England he was made a stablehand for an English viscount. In most cases, the indenture lasted around seven years and required the servant to work for an employer without pay either as restitution for a wrongdoing or as repayment for passage to America. This type of servitude was usually lowly but included room and board, and involved hard labour.

Clearly, vengeance is at the heart of the book, as Colin, the protagonist, witnessed the Parliamentarians murder his mother. Losing the gentle hand of his mother, witnessing her murder, and losing all they had to become indentured servants obviously had a deleterious impact on Colin’s development as a man. But with that, could there have been positive impacts as well? Possibly humility, empathy, or other characteristics?

Fortitude is the first one that comes to mind. And his strong belief in family certainly was enforced because of his circumstances. But the ones you mention—humility and empathy—are also true. I imagine he was somewhat empathetic before he and his family were taken prisoner, but he definitely had a good lesson in humility fairly early on in Yorkshire.

Though Colin is your lead protagonist, it is clear that Emma, Alston, Roddy, and Stephen all play important roles as well. Do you ever worry about your readers getting lost with so many characters?

I try to make it very clear in the way I write each chapter who is speaking and who the story belongs to at that moment. For example, when you read one of Stephen’s chapters, you can tell right away that it belongs to him because of the coarse language he uses and his thought process in everything he does. Because the characters are so different, I think the reader is able to follow the story fairly easily. I hope I’m right.

With the rich backdrop of mid-1600 England, did you seek to write a visually appealing story—something that your readers could see unfolding like a movie in their mind’s eye?

I did and I sure hope the readers can see and feel the place and time. There’s a lot of drama in Shame the Devil and the backdrop of England, Scotland, and the colonies helps to add more depth to it.

What do you do to prepare your mind for writing?

I like to write in big chunks. In other words, I won’t sit down at the computer unless I have several hours available to write. I’m also not the kind of author who can go to a coffee shop and sit amongst others to write. I need peace and quiet to focus and transport myself back in history. Now that my sons are back in college, I will have more time to write.

Do you have critique partners you meet with—virtually or in-person—to discuss your manuscripts and talk over ideas and your book’s arc?

One hundred percent YES! I have a dear friend who writes in a different genre, but who I trust implicitly to do casual edits and make bigger suggestions. I send her my book in pieces and wait for her approval before I move on. I also have a beta reader who reads the entire book and will give me her opinion—the good, bad, and the ugly—and she’s usually right.

What is something about you, your readers may not know?

I dress up in 16th-century clothing and give lectures on the English Renaissance using a noble English accent for local schools.

Can you tell us what you’re working on now?

Right now my newest novel, The London Monster which is scheduled to release in January 2021, is with my editor, so I’m awaiting her remarks. It’s based on the sexual miscreant who terrorized the streets of London in 1789-90, by stabbing unsuspecting women after they snubbed his advances. While those edits are being worked on, I am trying to finish the sequel to Shame the Devil.

Thanks so much for joining us and I’m going to go online right now and purchase your book! 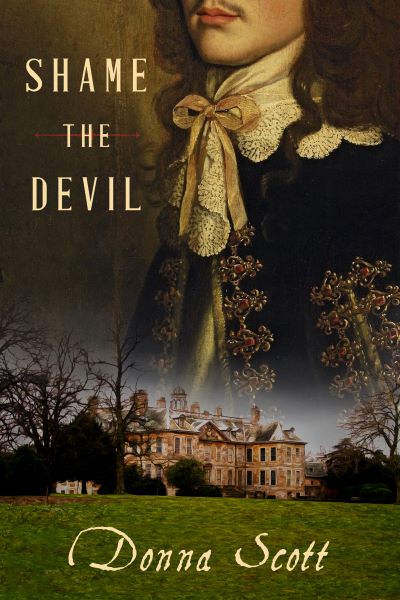 England, 1643. The Civil War has created a great divide between those who support King Charles and those who would rather see his head on the block. Young Scot Colin Blackburne finds himself caught in the middle when he witnesses Parliamentarians murder his mother because of his father’s allegiance to the king. As further punishment, the family is sent to Yorkshire as indentured servants.

Mistreated by his master and tormented by a Parliamentarian soldier, Colin vows to take up arms for the king and seek vengeance against the men who killed his mother. The only bright spot in his life is his unexpected, and forbidden, friendship with his master’s daughter, Emma Hardcastle.

With her father constantly away on campaign and her mother plagued by madness, Emma is drawn to Colin and his brother, Roddy. She introduces them to her troubled neighbor Alston Egerton, who has a clandestine relationship with Stephen Kitts, the soldier out for Colin’s blood.

As they all become entangled in a twisted web of love, jealousy, desire, and betrayal, the war rages on around them. Resentful at being forced into servitude and forbidden from being with the woman he loves, Colin puts his plan for vengeance into motion, though it will have disastrous consequences for all of them.

Secrets are revealed and relationships are torn apart. With the country teetering on the brink of ruin, Emma fights to survive, Alston is forced to confront his demons, and Colin must decide whether his burning desire to fight for justice is worth sacrificing a future with the woman he loves.

“Scott’s writing is magnificent…The intricately woven secrets and lies against the backdrop of an unprecedented dethroning of the monarchy make Shame the Devil a page-turning experience. Historical fiction and romance fans should not miss out on this book. Highly recommended.” -Chanticleer International Book Reviews

“The references to the situation happening in England during the time of the Civil War are interesting to read about…The struggle between the Parliamentarians and Royalists is fascinating to follow and thought-provoking…and you will follow some lovely characters throughout the book.” -Reedsy Reviews

“Scott’s…gentle manipulation of the material [is] appealing and easy to follow, even for those unfamiliar with the details of the English Civil War…I appreciate how Scott used the history to frame the dramatic events of her story…I enjoyed Colin, Roddy, and Emma well-enough, but I was genuinely attached to Alston…I was captivated by his arc and thought his story the most dynamically compelling. Stephen, repugnant though he is, also deserves a shout out as a fabulously layered antagonist.” –Historical Fiction Reader

During the Blog Tour, we are giving away 3 paperback copies of Shame the Devil by Donna Scott! To enter, please use the Gleam form below.

The giveaway is open to US residents only and ends on September 22nd. You must be 18 or older to enter.

Donna Scott is an award-winning author of 17th and 18th century historical fiction. Before embarking on a writing career, she spent her time in the world of academia. She earned her BA in English from the University of Miami and her MS and EdD (ABD) from Florida International University. She has two sons and lives in sunny South Florida with her husband. Her first novel, Shame the Devil, received the first place Chaucer Award for historical fiction and a Best Book designation from Chanticleer International Book Reviews. Her newest novel, The London Monster, will be released in January 2021.

Monday, September 14
Review at Passages to the Past

Monday, September 21
Review at Books and Zebras
Excerpt at A Darn Good Read

Tuesday, September 22
Interview at Passages to the Past