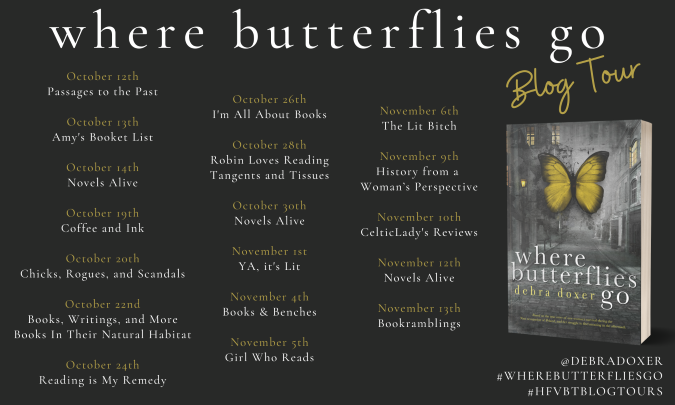 I am so humbled and pleased to have author Debra Doxer with us today on Novels Alive.

I’m so happy to be here!

Where Butterflies Go is based on your great-aunt’s life, were you able to talk with her and get these stories from her directly, or did you watch interviews, read articles, talk to relatives, or a little bit of each?

A little bit of all those things. I only met her a few times, and I was young at the time. But my father and grandmother told me her story many times. It’s always been a part of our family history. Her experience is also documented at Yad Vashem. She was interviewed by officials after the war and her testimony is part of the official documentation of events.

You write in your author’s notes that it took several years for you to complete this book. I imagine it took a significant toll on you each time you began writing, especially as these aren’t just fictional characters but are based on real people—your family members. How did you heal your heart after writing this book?

What a great question. There are so many emotions attached to my family history. There is no way to really heal or not get choked up when I think of it. My father has tried to read the book a few times. Each time, he puts it aside and can’t continue. For me, I look at my own daughter and feel tremendous gratitude.

Do you feel that by sharing your family’s story, you are honoring your great-aunt’s legacy by continuing her work so the Holocaust will never be forgotten, and history may never be repeated?

I do hope I’m honoring her and all the other survivors and victims. It was really the children who I had in mind as I wrote this. The loss of so many innocent children is almost incomprehensible, and the way they perished is absolutely horrifying. It was important for me to make sure that aspect of the story came across.

In 2018, the Washington Post reported two-thirds of millennials didn’t know what Auschwitz was, and 22% didn’t know what the Holocaust was. On a positive note, 93% of respondents to this study believed all students should learn about the Holocaust. Do you feel as time marches on, our youth may be forgetting the lessons history has taught us, and is it not our responsibility to make sure those lessons are not forgotten?

Yes!! That is absolutely why I wanted to publish this book. As the survivors pass away, it is up to us to make sure their stories are remembered. And not only remembered but understood and taken to heart. You can read the facts in history books, but I wanted to put the events out there in a more consumable way that went beyond statistics and statements, because if you can connect to the events on an emotional level, through personal stories, it’s not so easy to forget or dismiss them.

Where Butterflies Go is written from your great-aunt’s perspective, but did you agree with her takes on your grandmother, Zotia, and grandfather, Eli? Was it difficult to write your grandparents in a somewhat negative light?

Another good question. My grandmother was a piece of work, no question about that. I loved her, but she wasn’t an easy person. Having said that, I try not to judge her. She lost her whole family too and had to hear second-hand how her own parents died. The truth is, they were all scarred by what happened in their own ways. My grandfather died when I was very young and by all accounts, he was a kind and gentle man. The character of Eli in the book was bit more fiction than reality.

After Meira escapes the death squads and the war ends, she is told over and over again how lucky she was to be alive, but she didn’t feel lucky at all—she felt empty and alone but wasn’t sure whether she wanted or should change that status. However, she allowed Mr. Diamond, the sweet elderly tailor, into her life and her heart. Without giving any spoilers away, was Mr. Diamond a fictional character for the book’s purpose, or was he someone your aunt truly did come to know and love?

Mr. Diamond was for the book’s purpose. My great aunt (her real name was Lutka, by the way) never spoke of anyone like him. He was a tool I used to help us learn what Meira was thinking and to reveal her process as she tried to make peace with what happened. But he’s also a manifestation of hope in the story. Meira never lost hope, and I don’t believe my great aunt did either.

I honestly don’t know the answer to this, but I wouldn’t think my grandmother envied her sister exactly. As I said earlier, they all had their own baggage they were carrying, and it came out in different ways.

Can you tell us something about your great-aunt’s life that didn’t make it into the book?

I used almost everything I knew about my great aunt in the book. I can tell you more about my own grandmother. She actually went to Uruguay, where my father was born, before she came to the United States. My grandfather emigrated to Uruguay from Poland before the war looking for more opportunities, and she met him for the first time in Montevideo before they were married. My grandmother spoke four languages fluently: Yiddish, Polish, Spanish, and English.

Have you had an opportunity to visit Poland and visit Warsaw and the concentration camp where the Nazis murdered your great-aunt’s husband and child? If so, can you tell us about it? If not, would you like to go, or do you have plans to go?

My parents went to Auschwitz, not Poniatowa, but I haven’t gone. I believe Poniatowa is a bit more remote. It was very emotional for my father to be in Poland at all. I would like to go someday. I’d especially like to see Poniatowa, but I understand there’s nothing of what happened left to see. If you want to read about the events at Poniatowa, you can google Operation Harvest Festival. That’s what the Nazis called the liquidation of the camp. It occurred in the fall, November 3-4 in 1943.

You write in a few different genres. What book are you writing next?

I don’t know what I’ll be writing next. I have several ideas, and I’ll probably get started this summer. Like so many others these days, my life has been a bit upended by the pandemic. My daughter is home A LOT, which makes working a little more challenging. But I will get back to writing soon. I can already feel the itch.

Thank you so much for joining us today, Debra. Where Butterflies Go is such a moving, disturbing, poignant, and inspiring novel and one I highly recommend all readers read and make sure they have plenty of tissues nearby.

Thank you so much for having me and thank you for reading the book! 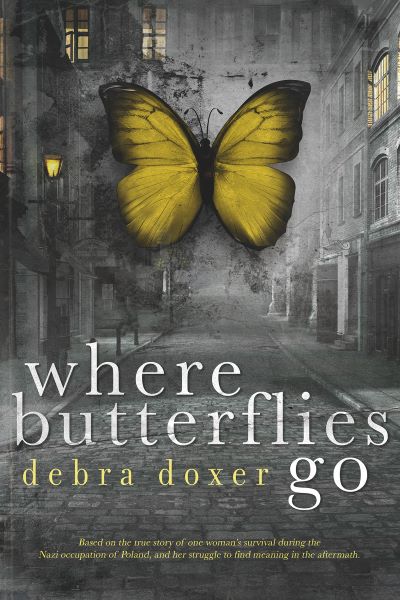 During the Blog Tour, we are giving away three $25 Amazon Gift Cards! To enter, please use the Gleam form below.

The giveaway is open to US residents only and ends on November 13th. You must be 18 or older to enter.