GUEST BLOG: Write What You WANT to Know by Vicki Delany Plus Giveaway!

Previous articleBOOK BLAST: IT’S NOT ABOUT ME, IT’S ABOUT THEM by booker ml Plus Giveaway!
Next articleGUEST BLOG: How a Glowing Review Inspired Me by Deb Pines Plus Giveaway!

There is an old adage: Write what you know.

I’ve never agreed with that. Frankly, what most of us know (and thus what we do in our lives) isn’t very interesting. I know all about designing computer systems for the banking industry, growing (and eating) tomatoes, driving long distances, and reading crime novels.

All of which hardly makes for fascinating fiction.

So let’s change the adage to: Write what you want to know.

And that’s what I did in order to write the first book in the Catskills Summer Resort series, Deadly Summer Nights.

Now I was alive in 1953 but the political events and the social customs of the time weren’t of utmost importance to me. (Except maybe for the popularity of Pablum).

So I set about learning about the fashions and customs of the time.  The best thing about writing a historical series set in the not too distant past is that there are not only a plethora of photos from the era but movies actually made in the year I’m interested in. I watched Fred Astaire dance routines and Ester Williams swimming movies. I studied the clothes and the hairstyles and the cars and the attitudes of people in those movies. Boy, did people ever smoke a lot.

The food was easy to replicate on paper. Not only are there a multitude of photos on the Internet, but entire cookbooks from the 1950s are still around. I myself have one from the 1970s. Tomato in aspic anyone?

My protagonist, Elizabeth Grady, who is the manager of Haggerman’s Catskills Resort, owned by her mother Oliva Peters, a retired Broadway and Hollywood dance star, has curly red hair that she says is like Lucille Ball’s. So Elizabeth has copies Miss Ball’s hair style—a poodle cut. It was easy enough to find images of the actress with that cut and many imitations from the time. And thus, I could describe Elizabeth’s.

As for the location of my series, the Catskills, that presented a bit of a problem. I’ve driven past the Catskills many times, and seen the signs on the highway. But I’ve never actually turned off the highway. I planned to go on a location research trip in sprint 2020. Oopps. That never happened. I’m Canadian, and the borders were closed. But once again, I had plenty of eye-witness accounts to rely on mostly in books written by people who remember the glory days of the great Catsills Resorts as well as photos taken at the time

In short, I learned what I wanted to write about and I hope I brought the Catskills in 1953 to life on the page 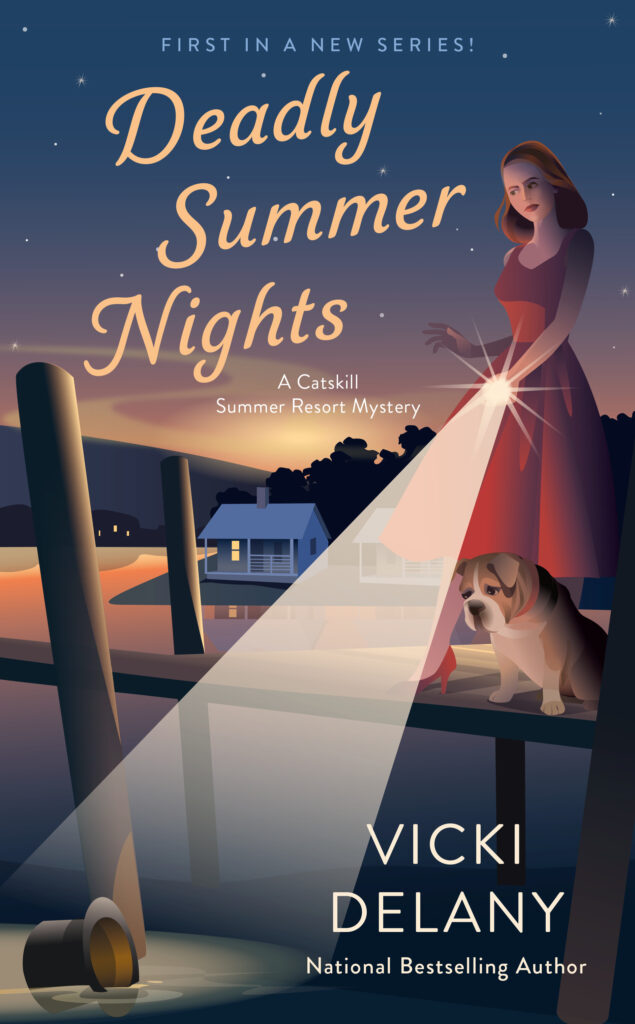 A summer of fun at a Catskills resort comes to an abrupt end when a guest is found murdered, in this new 1950s set mystery series.

It’s the summer of 1953, and Elizabeth Grady is settling into Haggerman’s Catskills Resort. As a vacation getaway, Haggerman’s is ideal, and although Elizabeth’s ostentatious but well-meaning mother is new to running the resort, Elizabeth is eager to help her organize the guests and the entertainment acts. But Elizabeth will have to resort to untested abilities if she wants to save her mother’s business.

When a reclusive guest is found dead in a lake on the grounds, and a copy of The Communist Manifesto is found in his cabin, the local police chief is convinced that the man was a Russian spy. But Elizabeth isn’t so sure, and with the fate of the resort hanging in the balance, she’ll need to dodge red herrings, withstand the Red Scare, and catch a killer red-handed. 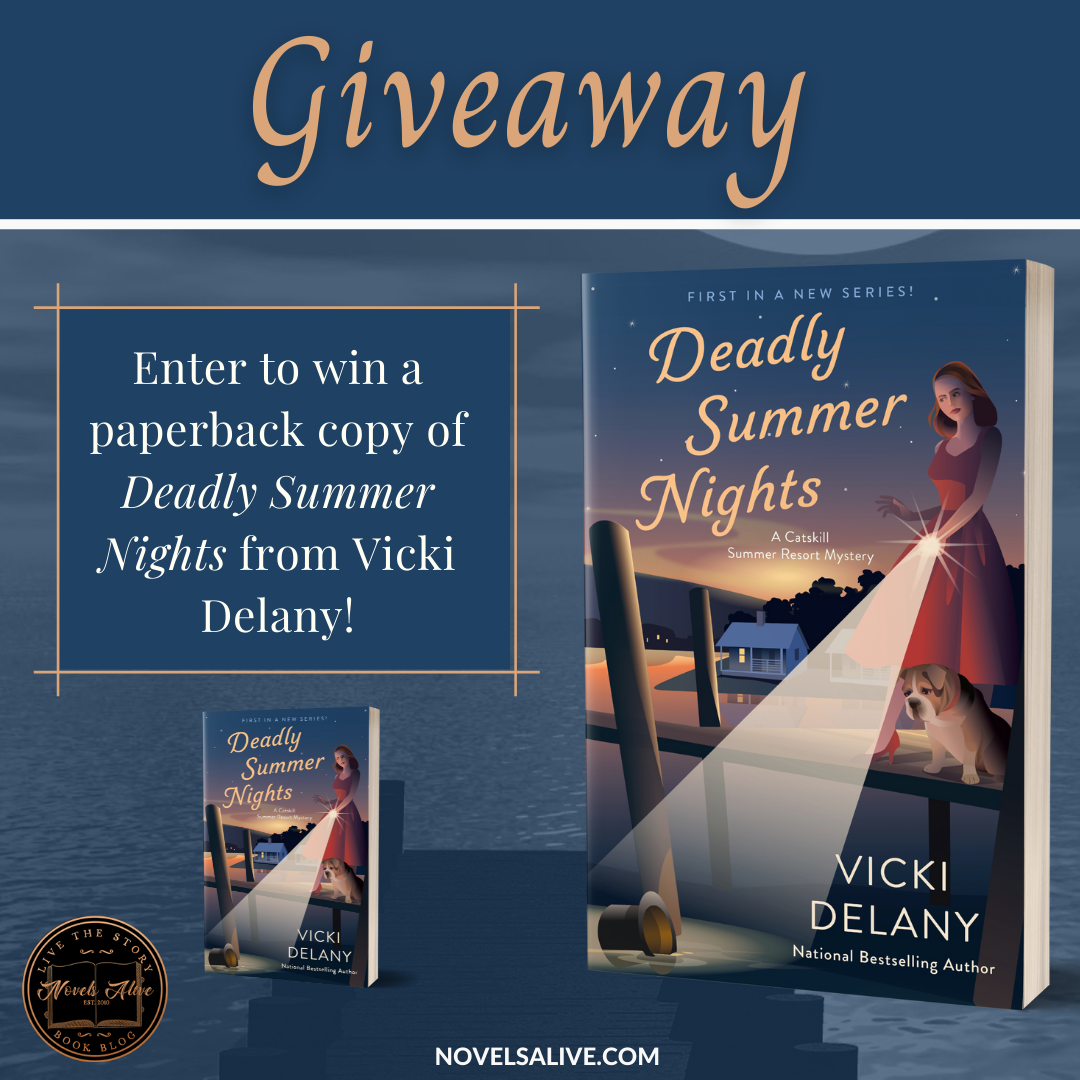 Vicki Delany is one of Canada’s most prolific and varied crime writers and a national bestseller in the U.S. She has written more than forty books: clever cozies to Gothic thrillers to gritty police procedurals, to historical fiction and novellas for adult literacy. She is currently writing four cozy mystery series: the Tea by the Sea mysteries for Kensington, the Sherlock Holmes Bookshop series for Crooked Lane Books, the Catskill Resort mysteries for Penguin Random House, and the Lighthouse Library series (as Eva Gates) for Crooked Lane.

Vicki is a past president of the Crime Writers of Canada and co-founder and organizer of the Women Killing It Crime Writing Festival. Her work has been nominated for the Derringer, the Bony Blithe, the Ontario Library Association Golden Oak, and the Arthur Ellis Awards. Vicki is the recipient of the 2019 Derrick Murdoch Award for contributions to Canadian crime writing. She lives in Prince Edward County, Ontario.

September 2 – Escape With Dollycas Into A Good Book – REVIEW

September 2 – Reading Is My SuperPower – REVIEW

September 2 – I’m All About Books – SPOTLIGHT

September 6 – This Is My Truth Now – REVIEW, CHARACTER GUEST POST

September 8 – I Read What You Write – REVIEW, AUTHOR INTERVIEW

September 10 – View From the Birdhouse – REVIEW