INTERVIEW: A Visit with Jessica Scott

Previous article
BOOK BLAST: TWO TO WRANGLE by Victoria Vane With Texan Handbag Giveaway
Next article
GUEST BLOG: Be Careful Or I’ll Write You Into My Next Novel…by Sarah Hegger With Mega Giveaway

Jessica Scott is an active duty army officer and an Iraq war veteran, so when she writes about soldiers and the challenges they face after returning home you know you’re getting it straight. If you haven’t discovered her yet, give her new Falling series a go. You’ll likely be searching out her back list….Enjoy….

I had no idea there was a Military Writers Guild! Is there a sub-genre for Military romance? (this is more curiosity for me but can include as a question..up to you).

The MWG started last year (I think) and it was an effort by Nate Finney and a couple of others who were active in the veteran writing community. It’s a fantastic group that’s incredibly supportive of veterans writing across all genres and platforms.

Did being one of Esquire’s Americans of the Year 2012 bring any noticeable change in the way your writing was perceived?  Did it have any positive effects at all?

Not really. It was incredibly flattering to be featured and really, it’s all because of a single tweet. It’s really something I get to say happened once and it’s made me a teeny bit more circumspect about things I tweet now because you never quite know who’s watching.

As a soldier and sociology student (have you got your degree yet? know from FB you’ve been working your behind off) what drew you to writing?

I’ve always written. When I was a kid, I had these notebooks where I wrote really terrible Anne McCaffrey fan fiction. One of the characters looked like the Nelson twins with bad 80s mullets. But in 2007 when I was away from my husband and kids for the first time, I started writing and this time, the story kept coming. It took five years, but that first version of AFTER THE WAR eventually made it to a book—I’m proud as hell of the journey those characters and that book took me on.

Writing for me is in some ways therapeutic and educational. I get to reach an audience that I wouldn’t normally reach with my books. People tell me they learn something about military life from my books—even among the dick jokes and irreverent humor. Because I write about active duty soldiers, my books are pretty unique in a lot of ways. There are no special forces troops and nary a Navy SEAL to be seen. I don’t say that as a pejorative but to say that I wanted to see the everyman and everywoman in my books—the struggles of every day soldiers coming home from war are a compelling and interesting story for me and obviously very personal, too. I write the books I’d like to read. Sometimes, I still can’t believe I get to write these things and people other than my mother actually read them, lol!

Was it cathartic to write about the issues soldiers face returning home & to their families? Has it helped any of your readers that you’re aware of?

It really is and it remains a key form of expression for me. I’ve had several emails over the years that really hit home about why what I write is important. I had a mom who’d lost her daughter in Iraq email me and tell me she felt like she’d gotten her daughter back when she read my stories. I had people email me and tell me the description reminded them of what their son or daughter told them about when they were deployed. I had one person email me and tell me they hated me after reading BEFORE I FALL because I made them realize they were an addict. They were going to get help but they hated that I made them feel that way. I guess it was a good thing because if they were getting help, right? But it hit me hard that as much as I might write for myself sometimes, I need to really think through the impact my words have had.

What can we look forward to in the future from you?

I have no idea, lol! I’m hoping to have another book out later this year in the Falling series but we’ll see how that goes. I’m finishing up my phd in sociology in the next year and a half or so. Then after that, we’ll see.

Have you read anything lately that you’d recommend to others?

I’ve just started Farrah Rochon’s Moments in Mapleview series and they’re so flipping amazing. I love the rich description she writes with. I can practically hear some of her characters in my head that match up with folks I’ve served with.

Don’t miss getting in on Jessica’s newest series. BREAK MY FALL is the second in her Falling series. 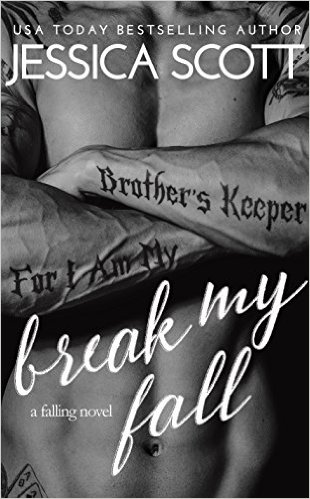 Violence. I’m addicted to it. It’s how I feel alive. It’s the only thing that’s real any more.

And now I have to sit around and discuss it like it’s physics or calculus. I can’t do it. I can’t pretend that it’s some sterile academic topic.

Until I met Abby, I never wanted anything beyond the next fight. Never considered that I might finally find a way back to the land of the living.

Now? Now I find myself dreaming of a woman with golden eyes.

But I can never be with her. Because I am not whole. And I never will be again.

But I cannot stay away. And loving her might finally be what breaks me.

Jessica Scott is an Iraq war veteran, an active duty army officer and the USA Today bestselling author of novels set in the heart of America’s Army. She is the mother of two daughters, three cats and three dogs, and wife to a retired NCO. She and her family are currently wherever the army has sent her.

She’s also written for the New York Times At War Blog, PBS Point of View Regarding War, and IAVA. She deployed to Iraq in 2009 as part of Operation Iraqi Freedom (OIF)/New Dawn and has had the honor of serving as a company commander at Fort Hood, Texas twice.

She’s pursuing a graduate degree in Sociology in her spare time and she’s been featured as one of Esquire Magazine’s Americans of the Year for 2012.

Jessica is also an active member of the Military Writers Guild.