GUEST BLOG: Why the Congo Civil War? by M.T. Bass

I knew for a while that one of the sequels to My Brother’s Keeper would take place during the 1960s civil war in Congo. I originally intended the second book to be about Hawk’s bush piloting days in Alaska, but I had recently completed Somthin’ for Nothin’ and one of the main characters of that story was Jimmy the Pilot, who flew supplies to camps on the Trans-Alaska Pipeline and smuggled drugs up from Mexico. It felt like I had covered some of that ground already, so I skipped to the next book on my To-Do list.

The main impetus behind the story was the chance not only for Hawk to get back into combat flying again but to relive his World War II days of piloting the P-51 Mustang. A retired Air Force pilot I know told me how he volunteered to fly propeller-driven A-1 Skyraiders in Vietnam because instead of flying jets, he wanted to fly Mustangs and that was the closest he would ever get to it. That idea became the core of Jungleland.

From there, it took quite a bit of research to sort things out. Congo—now known as Zaire—has been in constant turmoil since the Belgians set the country free in 1960 and it’s still going on today, as you can see in the movie Virunga.  I knew my story would be told during the original Congo Crisis in the early Sixties, but I had to sort out the who’s, what’s, and why’s of what was going on—and getting some of the main players right.  I dug in and read as many books as I could about the time, watched as many videos about the conflict, and learned a lot about jungle fighting listening to podcasts by Navy SEALs who fought in Vietnam.

In Congo, Hawk flies a T-6 Texan along with repatriated Cuban pilots, who were originally trained by the U.S. to fly in the Bay-of-Pigs invasion. Angel, Eduardo, and Rafael were recruited by our government to fight the communists again in Africa—which they happily did—but, of course, Hawk doesn’t care about any of that, just the flying part. Unfortunately, the local C.I.A. man, Roscoe Pettis, keeps trying to drag him into the cold war politics. Hawk puts up with it only to pass on the slush funds he gets from Roscoe to his friend, Father Bob, at the local mission.

Then there are the mercenaries hired to fight for the government. As Hawk finds out, they are definitely as nasty a bunch of characters as any of the Simba rebels or the local tribesmen, like Simon, who is hired to protect Father Bob and Ella Mickleson, the young new doctor at the mission.

And amidst all of the flying and fighting, the stage is set in Jungleland for what is essentially a romance between Hawk and a strong-willed woman. 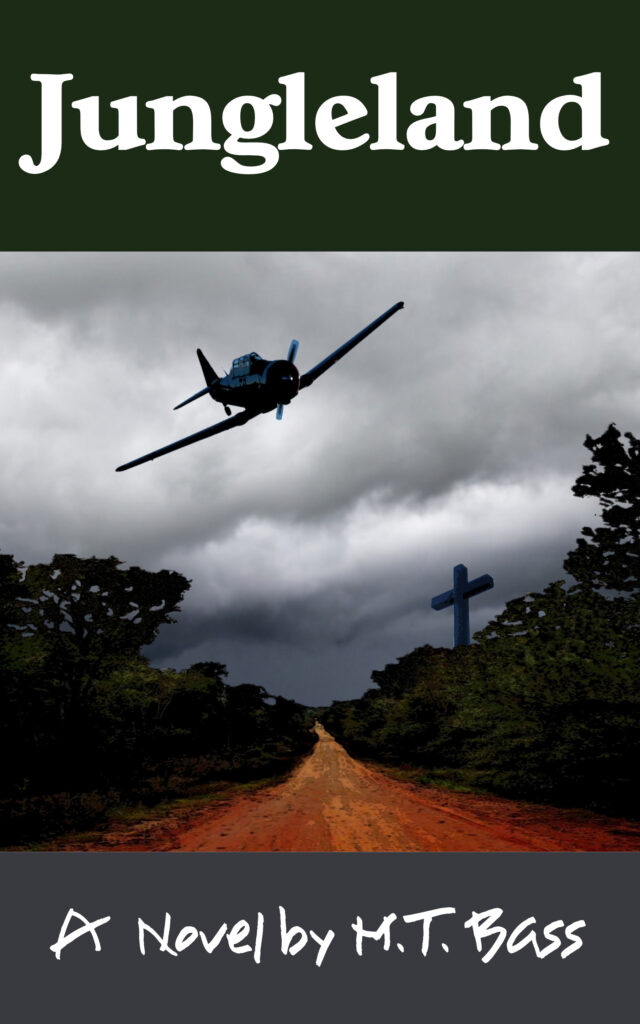 “There are only two types of aircraft:  fighters and targets.” ~Doyle ‘Wahoo’ Nicholson, USMC

Sweating it out in the former Belgian Congo as a civil war mercenary, with Sparks turning wrenches on his T-6 Texan, Hawk splits his time flying combat missions and, back on the ground, sparring with Ella, an attractive young missionary doctor, in the sequel to My Brother’s Keeper.

M.T. Bass will be awarding a $50 Amazon/BN GC to a randomly drawn winner via rafflecopter during the tour.

M.T. Bass is a scribbler of fiction who holds fast to the notion that while victors may get to write history, novelists get to write/right reality. He lives, writes, flies and makes music in Mudcat Falls, USA.

Born in Athens, Ohio, M.T. Bass grew up in St. Louis, Missouri. He graduated from Ohio Wesleyan University, majoring in English and Philosophy, then worked in the private sector (where they expect “results”) mainly in the Aerospace & Defense manufacturing market. During those years, Bass continued to write fiction. He is the author of eight novels: My Brother’s Keeper, Crossroads, In the Black, Somethin’ for Nothin’, Murder by Munchausen, The Darknet (Murder by Munchausen Mystery #2), The Invisible Mind (Murder by Munchausen Mystery #3) and Article 15. His writing spans various genres, including Mystery, Adventure, Romance, Black Comedy and TechnoThrillers. A Commercial Pilot and Certified Flight Instructor, airplanes and pilots are featured in many of his stories. Bass currently lives on the shores of Lake Erie near Lorain, Ohio.