When writing That Scoundrel Émile Dubois, I did some research on Christmas customs in the late eighteenth-century UK.

In that novel, the main action starts with the arrival of Émile on Christmas Eve 1794 at his aunt’s isolated mansion on the foothills of the Famau Mountain in Denbighshire with the first snow.

I thought readers might be interested to hear of some of the interesting facts I found out.

The festival traditionally lasted a long time—from St. Nicholas’ Day on 6 December until Twelfth Night on 6 January. It was a time of religious worship, with the singing of carols and church attendance the central part. The churches in those days would, of course, have been unheated, and people dressed up in thick clothing to attend.

It was also a time of feasting and celebration, with roaring fires built and general hospitality with seasonal foods prepared for celebratory feasts.

Intriguingly, Christmas Trees weren’t then the central feature of the festive displays. This, which seems such a traditional British custom, was popularly adopted only after Queen Victoria’s husband Prince Albert introduced it from his native German state of Saxe Coburg in the late 1840s. In fact, another German consort, Queen Charlotte, the wife of George III, seemingly anticipated him by having one erected at a private party in 1800.

Of course, pre-Christian pagans throughout Northern Europe and in particular in the old German states had celebrated Yuletide, which included various rituals involving trees, sacred groves, and the customs connected with the bringing in of the Yule Log. These seem to have merged into the one of digging up or cutting down a Christmas tree to decorate inside.

In the late eighteenth-century, Christmas decorations would be put up, but they would be garlands of holly, ivy, and other evergreens. There was, of course, the famous ‘mistletoe bough’ under which kissing rituals traditionally took place.

Present giving was actually a ritual belonging to St Nicholas’ Day, on 6 December, associated with the patron saint of children and sailors. Throughout Europe, there were various traditions of present giving connected with this day.

In Britain, with the break from the Catholic Church, the traditions of St. Nicholas became increasingly linked with those of Christmas Day as a way of celebrating the gifts to the baby Jesus by the three wise men, with the personification of Christmas in Father Christmas taking over the present giving attributed to St. Nicholas.

We associate Father Christmas with wearing an outfit of scarlet or crimson. In fact, earlier versions of him—including the one in Dickens’ A Christmas Carol—depict him as wearing green.

Those who could afford it and particularly those with social status were expected to provide food and drink for the poor. A squire would traditionally lay on an actual feast. Mulled wine and mince pies would be among the festive foods on offer.

In medieval times, fruit had been added to pies containing lamb (put in to celebrate the shepherds at the Nativity). The addition of fruit was possibly to ensure that if the meat was slightly off, it still smelt and tasted pleasant. However, by the late eighteenth century, the mince pies would consist of fruit, fat, and pastry alone. Plum pudding was another traditional festive food that gradually developed into Christmas pudding.

Turkey was not traditionally eaten at Christmas. In those days, it was a rarity, eaten only by the very wealthy. Those with enough money to buy one ate goose (which might well be roasted in a neighbouring bakers). These geese were often driven in flocks in from the country and fattened in the city, as happens in the Sherlock Holmes short story (set in the late nineteenth century) ‘The Blue Carbuncle.’ Turkey only replaced the traditional goose in the mid-twentieth century.

Having begun this article with a reference to my novel That Scoundrel Émile Dubois, it seems fitting to end this article by saying that it is at a Twelfth Night ball that the heroine Sophie realises that the giggling and salivating Mr. Kenrick is a form of vampire, while the anti-hero Émile is drawn in by his siren wife, Ceridwen Kenrick. 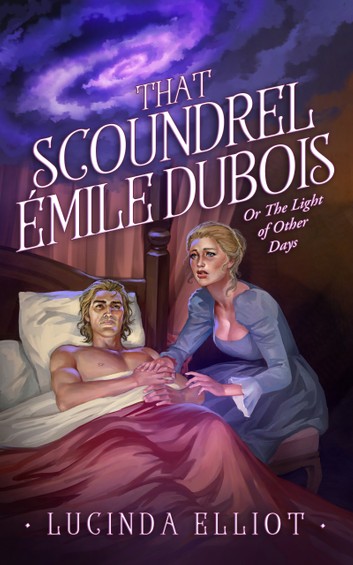 A dashing highwayman lying low from the Bow Street runners is bitten by a siren half vampire and joins with a dowager’s virtuous companion in a Gothic adventure with vampires and time travel.

Young Sophie de Courcy, living as a poor relative with an elderly countesses’ family in an isolated mansion on the mountains in North Wales, dreams of romance and adventure.

When Sophie’s long term hero, the rascally Émile Dubois, comes on a vsiit to his aunt the countess, their sinister neighbours the Kenricks machinations draw him, and Sophie too, into a world of man vampires and time warps.

Now Sophie has more adventure than she ever wished for.

It is lucky for Sophie that she has a staunch ally in her lady’s maid Agnes, who combines common sense with a talent for Tarot reading.

Winner of the BRAG medallion for outstanding self-published fiction, this over-the-top Gothic adventure is full of dark humour, romance and derring-do and an affectionate spoof on the themes of classical Gothic. 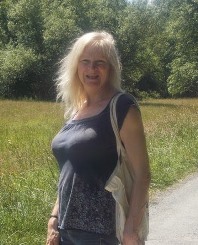 Lucinda Elliot loves writing Gothic style stories, which isn’t surprising because she was brought up in a series of big old isolated houses which her parents were refurbishing (it wasn’t so fashionable back then). After that, she lived, studied and worked in London for many years and now lives in Mid Wales with her family.

She loves writing about strong women to complement gung-ho males.

Her interests do include weight training and body shaping,and she was once a champion Sportsfighter, but apart from that her interests are quite geeky. Reading classic novels, conservation, gardening, and even names and their meanings (bring on the carrot juice). She loves a laugh above anything.