Previous articleGUEST BLOG: WHERE ANGELS CAN’T FOLLOW: The Art Quotes by Jessi Kallison
Next articleGUEST BLOG: Unwanted Pregnancies During the Great Depression and Their Role In My Novel THREADS: A DEPRESSION-ERA TALE by Charlotte Whitney

Writing a humorous mystery using a campaign for Congress is a bit tricky. First, I didn’t want to portray a specific political party in a negative light, even though it’s clear from the start that the protagonist, her family and colleagues favor one candidate over the other. To accomplish that, I focused on policy rather than politics. Granted, on the national level, people might assume that activists opposed to big oil are left-leaning, but young people in general are motivated by environmental concerns. And they tend to be passionate about their causes. In addition, transportation of oil and pipelines have been hot issues in my state for some time. This was the underlying theme for the story, and definitely not funny.

Second, I needed to create tension between the two campaigns while at the same time making the people working on the campaigns sympathetic. Since one group of volunteers was actually committing a crime related to their campaign work, that was challenging. However, my own experience made me sympathetic to what they were doing. As a teenager, a group of friends and I thought it was funny to switch campaign yard signs from one residence to another. We did it late at night, oblivious to consequences. We were never caught – fortunately – but I still remember the thrill of sneaking around in the dark doing what we considered a “prank.” Even though campaign volunteers are more aware of costs associated with producing and placing signs in visible locations, there is still something “prankish” about changing out signs.

Finally, there’s the challenge of making any murder mystery humorous. We seek laughs to relieve tension, to deal with things that are uncomfortable, and to distract ourselves from the stress of living in chaotic times. That said, how does an author find humor in a story about people dying or in danger because of a bitter political campaign?

I enjoy writing about quirky characters who find themselves in serious situations. That’s why I created Penny-wise Investigations, a Discount Detective Agency located in a mall. There used to be a hole-in-the-wall detective agency in an isolated neighborhood near Seattle that I frequently walked past. I always wondered about their clients. I imagined local people with small problems going to them for help with troublesome relatives, runaways, errant spouses, whatever issues they couldn’t solve on their own. That was the kernel for creating Penny-wise, although in my mysteries, small investigations morph into larger issues and at least one death.

In addition to the off-beat agency with its idiosyncratic owner and staff, I try to relate humor through day-to-day family life. Cameron, my main character, is a single mom living in a carriage house with her two children and her mother. How could this not produce the occasional smile? And anyone who has launched a new career, as Cameron does by becoming an investigator, knows how easy it is to find yourself in laughable situations. That is, laughable after the fact, seldom in the moment.

The topic of humor is one I find fascinating. When I was first trying to identify my readers by comparing what I write to other authors, I found it challenging. Finally, I developed a 5-category matrix to identify mystery writers based on the type of humor they employ. Currently, I use the matrix in presentations to talk in more detail about humor – why we laugh at what we do and how preferences vary. In my matrix there’s the Kooky or “outrageous situation” where the focus is entirely on humor. The Comic with its non-offensive humor like that found in most cozies and capers. The Amusing, less overtly humorous, where more serious themes tend to dominate. The Edgy with its nuanced, intermittent humor and nonconformist protagonists. And the Dark, sometimes referred to as gallows humor, not always seen as funny with its emphasis on irony, sarcasm and extremes.

Although my mysteries are often labeled as cozies because of their humor, I consider them in the Comic category. I love doing research. Each of my mysteries has a serious underlying theme, from survival camps to chimeras to political campaigns. My goal is to provide entertainment with a little information about a topic or a culture a reader might find interesting. That’s why I often describe my writing as containing a “pinch of adventure and a dollop of humor.”

Aristotle suggested, the secret to humor is surprise. Mel Brooks put it more graphically: “Tragedy is when I cut my finger. Comedy is when you fall into an open sewer and die.” As a mystery writer who wants the reader to laugh as well as to enjoy a twisty plot with some serious content, I am constantly searching for an “open sewer.” Perhaps not the most appealing analogy, but I hope it produces a grin behind the whiff of disgust. 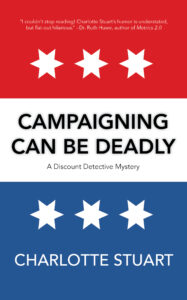 What begins as a prank ends in murder.

The campaign for the U.S. Congressional seat was referred to in the press as “Mr. Smith goes to Washington versus the carpetbagger.” The popular local candidate gets the majority of endorsements, but his opponent’s wealthy, out-of-state family is willing to do whatever it takes for him to win.

Penny-wise Investigations, a discount detective agency located in a mall, is hired to find out who is stealing the local candidate’s political signs. Two of their investigators, Cameron Chandler and Yuri Webster, not only catch the thieves in the act, they find a body next to a pile of stolen signs, proving that Campaigning Can Be Deadly.

Charlotte Stuart will be awarding a $25 Amazon or Barnes & Noble gift card to a randomly drawn winner via Rafflecopter during the tour.

In a world filled with uncertainty and too little chocolate, Charlotte Stuart has a passion for writing lighthearted mysteries with a pinch of adventure and a dollop of humor. Her first discount detective mystery, Survival Can Be Deadly, was a Foreward INDIES finalist. Why me? Chimeras, Conundrums and Dead Goldfish was a semi-finalist for the Chanticleer Murder and Mayhem contest before it was published. She began her career in academia with a PhD in communications. Then, she and her husband decided to build a commercial boat and go fishing for salmon in Alaska. Currently she is the VP for Puget Sound Sisters in Crime and lives and writes on Vashon Island in Washington State’s Puget Sound. She spends time each day entertained by herons, seals, eagles and other wildlife.